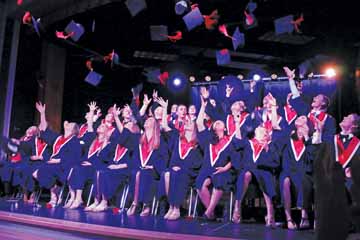 By Jamie Rieger
As the graduates from Senator Gershaw School move onto the next leg of their journey with eager anticipation, they will look back on their years with school friends, team mates, and mentors with fond memories.
“We’re Gonna Miss This” was the theme for the 2016 Senator Gershaw graduation ceremony, held on Thursday evening.
Valedictorian, Chad Beck took time to thank the parents and teachers, who guided them through the last 12 years, but he also spoke of the competitiveness of the graduating class.
“Our class is kind of competitive, not only academically, but athletically too,” he said. “You may think there might be some bad blood there, but the opposite is true. We always left the field as friends.”
Beck went on to say that the grads are ready to tackle whatever comes next for them.
“This is just the beginning, the start of our lives, our future. We are ready to take life on.”
The students have much to be proud of academically.The students accummulated 4,240 credits, averaging 140 per student. Only 100 are needed to graduate.
“That is a testament to all their hard work,” said princiopal Derek Beck, adding that 83 percent of the students will be receiving Rutherford scholarships. “They have been very positive leaders for our school,”
Drew Barnes, MLA for Cypress-Medicine Hat sent regards from the province and encouraged the graduates to recognize how blessed they are as they move forward with their lives.
Mayor Gordon Reynolds in congratulating the grads, encouraged them to take the values they have learned in their homes and in their community with them as they embark on the next chapter in their lives.”
Prairie Rose School Division chair Stuart Angle delivered words on behalf of the board of trustees.
“Life and learning is a journey, not a destination. This part of your journey is experience,” said Angle.“Learn more, adapt, and change. While you will miss the past, it is just that.”
PRSD deputy superintendent, Cal Koch told the graduates that Senator Gershaw is a very good example of the school board’s vision of “Learning together”.
“Be proud of all your accomplishments over the last three years,” said Koch. “Ultimately, we all look at high school graduation as completing the task. Every year, Alberta Education measures achievements throughout the province. For 2014-15, Senator Gershaw School was very, very impressive; the highest on every measure…The students of Bow Island are well-prepared for their next learning journey.”
Olympian rower, Pauline Van Roessel gave the address to the graduates.
Van Roessel, a graduate of St. Michael’s School, said, “When I graduated, at no point did I think I would be here giving a speech at a Senator Gershaw grad.”
Van Roessel, who left Bow island at 17, told the graduates that no matter how much time passes there is a connection to her hometown.
“There is always a balance, a lifelong connection with the community. Go onto your next goal and be The Senator Gershaw graduating class of 2016 include: Cassidy Babe, Chad Beck, Poncho Bergen, Peter Dekker, Ike Entz, Vance Fode, John Giesbrecht, Emily Gross, Alexander Hirch, Ethan Hopkins, Nicole Keuper, Mackenzie Kielstra, Zane Knouse, Nick Kregel, Lane Lakevold, Jordan Liggett, Miya Nishi, Justin Olson, Bradley Pickett, Allison Reimer, Taryn Renzetti, Graham Schaufele, Anneke Schussler, Tristan Stensrud, Dallas Thacker, Mark Vanderwel, Aaron Van Es, Rowan Van Roessel, Robert Visser, and Megan Waldner.

Photo by Jamie Rieger- The Senator Gershaw graduating class listen to dignitaries who offer words of congratulation and encouragement at their graduation ceremony on Thursday evening. 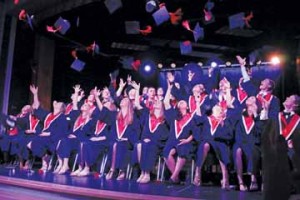 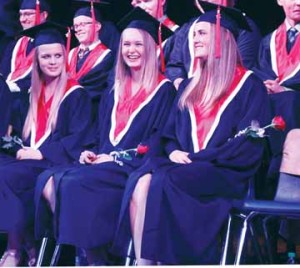 Photo by Jamie Rieger- From left: Cassidy Babe, Emily Gross, and Anneke Schussler share a laugh before the ceremony starts.