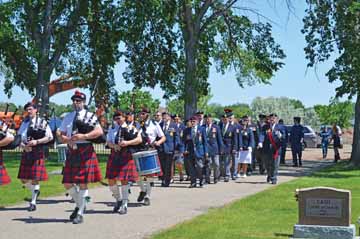 By Tim Kalinowski
Redcliff Legion members, veterans, supportive citizens and serving military members from BATUS and CFB Suffield gathered at the Redcliff Cemetery for Decoration Day on Sunday afternoon to pay tribute to all the veterans who have passed away in the community through the years.
The solemn ceremony was hosted by Second World War vet George Hope and presided over by Rev. David Carter of St. Ambrose Church. Hope was sporting a sling over a sprained arm, but was otherwise in good spirits as he took up his post behind the microphone to guide the day’s events as all the brightly uniformed Legionnaires, cadets and retired and serving armed forces members formed up in tight ranks between the tombstones.
A troupe of pipers from the South Alberta Pipes and Drums led the colour party in for the day, trumpeter Catherine Scott played the ceremonial flourishes, organist Gail Schmidt provided music alongside other Roving Choir members, and Kevin Corcoran bellowed out the marching orders as the ceremonial Sgt-At-Arms.
The official act of remembrance came with the laying of wreathes by the various military members, veterans and dignitaries present. However, the part of the day most in attendance looked forward to the most was when individuals were allowed to break off to find the graves of Redcliff’s veterans to stick their poppies on the stones in a more personal gesture of remembrance. After the official ceremony concluded refreshments were provided for all at the Legion Hall.
George Hope, who looking out on cemetery could see the graves of many of his old friends, neighbours and comrades who have passed away before him, said he always found Decoration Day a good time to take stock and reflect on all the veterans who have lived and died in Redcliff over the years.
“There is old friends buried in here,” confirmed Hope. “Friends I knew and grew up with. For me, personally, I am pleased I am able to come here and help out and make sure the day is a good day. And people come out and enjoy being here to recognize what this is about.” 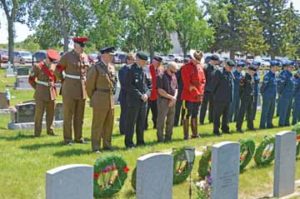 PHOTO BY TIM KALINOWSKI- Guests, including from BATUS, CFB Suffield, RCMP, and cadets joined Redcliff Legion members in a moment of silence during the Decoration Day ceremony held Sunday at the Redcliff cemetery. 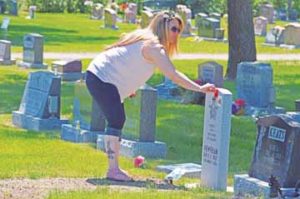 PHOTO BY TIM KALINOWSKI- Melissa Schaeffer places a poppy in memory of WW2 veteran Red Newnham, who passed away in 2015. 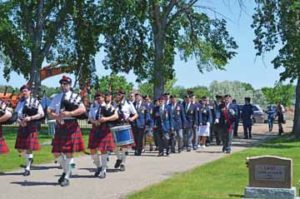