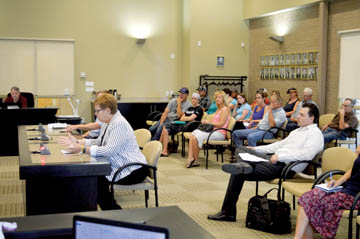 Photo by Tim Kalinowski- Dr. Kathryn Crooks speaks in opposition to a proposed lit greenhouse near her property on Range Road 63. Crooks was one of a group of neighbours opposed to the Skyview Growers proposal who showed up to give councilors an earful last Tuesday.