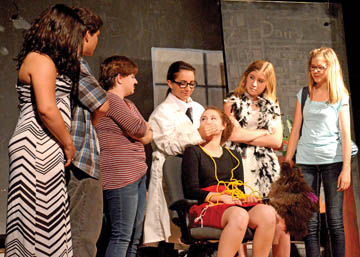 Photo by Tim Kalinowski- Cast members (from left) Courtney Roesler, Mark Maben, Sierra Poisson, Karlie Grover, Taylor Pachan (in chair), Kaitlyn Krell, and Taylor Place got some big laughs for their performances in "And Then There was One" last Wednesday night.

By Tim Kalinowski
Parkside School students put on a colourful display of dance, art and theatre during its Fine Arts Night last Wednesday. The highlight was certainly the two plays acted out before about 200 community members in the school’s gymnasium. While it was hot under the lights for the students on stage, and quite warm for audience members, the two comedies were both entertaining and in some ways quite bizarre.
“Alienated” revolved around an intrepid school reporter (Kirah Giles) who believes one of her classmates is an alien and seeks to prove it by questioning them all to test whether or not stories of previous encounters shake anything loose from the oddball group.
“Alienated” was a great ensemble performance for Parkside School with standouts Emily George, a.k.a. Wallace Nerd Boy, Ally Rodgers as Katie and Karlie Grover as Brian providing the biggest laughs.
The second play “And then there was One” took on the form of a classic murder mystery with some macabre elements thrown in as eight strangers are brought together on an isolated island by a mysterious host.  As each of the guests begin dying one by one in increasingly bizarre ways suspicions run wild among the survivors.
The cast of “And then there was One” went all out to bring the laughs in their performances; however, the warm stage lights ultimately got the biggest chuckles from audience members as the glue holding the fake mustaches and eyebrows of actors Sierra Poisson (Det. Horatio Miles) and Shyla Hurlbert (Clayhorn the butler) failed in the heat. This led to the actors’ fake facial hair falling off or curling up at odd moments which brought belly laughs from both audience members and sometimes even amongst the cast.
In the end, it all added up to a fabulous night of fun and laughter  at Parkside School Fine Arts Night.