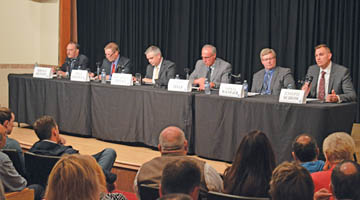 By Tim Kalinowski
Local Conservative Party candidates Brian Benoit, Paul Hinman, Michael Jones, Glen Motz, Greg Ranger and Joseph Schow laid out their credentials and opinions before an expectant crowd at a debate hosted by the Medicine Hat Public Library last Wednesday evening. The six man race to replace former MP Jim Hillyer, who unexpectedly passed away this past March, has riveted Medicine Hat-Cardston-Warner Conservatives. The party has experienced a huge balloon in membership from about 2,000 to over 5,000 members the past three months since the race began.
The debate last Wednesday was one of two being held in the riding prior to this week’s vote. With a preferred ballot at the centre of the race this year each candidate tried to differentiate himself from the guy beside him without straying too far from the Conservative Party’s core values and opinions. It made for a lot of common causes between the candidates: All were pro-life, anti-big government, anti-electoral reform, anti-marijauna legalization, pro-gun, staunch supporters of the oil and gas industry and pro-business.
With so much in common policy-wise between the six candidates, those in the audience were gauging the style of the men speaking, as much as their substance, to see who they would like best to represent them in the next byelection and potentially beyond in Ottawa. Thus the men’s opening and closing statements took on an extra importance on the evening.

Candidate Brian Benoit touted himself as a successful businessman who was able to get the ear of power brokers to bring jobs to the region.
Candidate Paul Hinman declared himself a champion of core Conservative values in the vein of Preston Manning and Stephen Harper with a proven track record in government as a former MLA.
Candidate Michael Jones reached out to the audience in a personal way and spoke of his small town values, and his success at running his own law firm in rural Alberta. He said he would use his candidacy to work in a positive way to build and create opportunities for economic growth for constituents.
Candidate Glen Motz spoke of his agricultural roots in Alberta and touted his years of proven community leadership as a former Medicine Hat Police Service Inspector.
Candidate Greg Ranger spoke to his success as a small business owner in rural Alberta, his bilingual abilities and his own unflinching social conservative values in the face of what he called the left’s “social degeneracy and impairment.”
Candidate Joseph Schow used his time to tee off on Premier Rachel Notley and Prime Minister Justin Trudeau. He said Canadian values where under attack and he, as a former chief of staff in Ottawa and a political insider, would be in the best position as a candidate to take the fight back to Parliament.
The question from moderator Kris Samraj which drew the most attention from audience members, and the most mental gymnastics from candidates, was when the candidates were asked to speak about a time they had failed and what they had learned from it.
On the question of failure, Greg Ranger spoke about a painful business experience he had had in the United States in trying to establish a modular housing factory on an Native reservation.
“I invested my time and supplies, and I was running a flooring and supply store at the time and I went down and assisted in that process. What I learned is you got to make sure all the agreements are 100 per cent in place and you’ve done all of your homework. I ended up coming back dragging my tail between my legs… I never made the same mistake twice.”
Joseph Schow reinterpreted Samraj’s question to phrase it more positively.
“I don’t like to say there is failures; just life-redirections. I would say mine is I didn’t get into law school. I applied and didn’t get in, and that redirected me to apply again for a prestigious Master’s program in Political Strategy through George Washington University. That degree helped me get into advertising. It subsequently helped me become a campaign manager, and following that I was offered a job as a chief of staff on Parliament Hill.”
Brian Benoit said he could honestly say he had never really experienced a drastic failure.
“My life has been very successful and well-accomplished, and I really wouldn’t have wanted any other way. I am where I would like to be… I haven’t really had a major failure, thank the Lord.”
Paul Hinman said he believed there was no such thing as failure as long as you haven’t given up.
“I would actually twist this question a bit to: What is the most expensive lessons in life? I guess I can go back in business to when I was a young farmer. My father passed away when I was 25 years-old. I thought I needed to hedge some of my barley crop. Barley had been down to $98 or $99/ tonne, and I went into a professional broker at RBC and he said this is great opportunity to hedge 25 per cent of your crop at $130/ tonne… It wasn’t long before barley was setting new records… It got up to $190/tonne. I paid for my mistake and learned a lot.”
Michael Jones spoke about a time when he doubted the law was for him, and had briefly tried another career.
“I can assure you Joseph (Schow),” said Jones with a chuckle, “that not getting accepted into law school isn’t the worst thing that could happen to you. As a young lawyer I had four kids under five, and it was an incredibly stressful time in my life. I worked six days a week, every week. And I sat down with my wife and we realized we couldn’t keep doing what we were doing. A friend sold life insurance, and he said you would be great at this, you should do it. So I decided I would give it a go… After three months of selling life insurance I realized this was not the way for me to support my family… I learned a lot from that so I went back to the law, and it has been very good to me ever since.”
Glen Motz spoke about some of the failures he had experienced in private life by being so career oriented in the police service.
“I think for me as I look back I can say I spent far too long in my life not living in the moment, enjoying where I am, who I am with, what I can learn, and what I can share,” he said. “I always looked ahead. I looked ahead at what I was trying to strive for. I looked ahead to what I wanted to achieve… In so doing, I missed opportunities to maybe influence people and be influenced. I missed opportunities to make a difference… We only get this shot once in life, and so you need to make the best of it.”
The vote for the local Conservative Party nominee takes place June 24 in Bow Island and June 25 in Medicine Hat. The winning candidate will be announced on June 26 at the Medicine Hat Lodge. The preferred ballot will offer local party members a chance to vote for the candidates in ranked order of choice. The candidate to first achieve 50 per cent after each round of counting will be declared the winner.