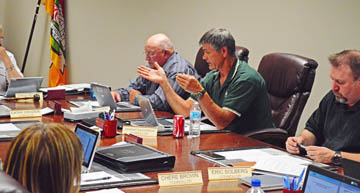 Photo by Tim Kalinowski- Coun. Dwight Kilpatrick makes the case against a motion to lower the speed limit on Main Street in the vicinity of the pool, library, arena, youth centre, and seniors' centre at the Redcliff town council meeting last Monday.

By Tim Kalinowski
Redcliff council has voted not to change the speed limit on Main Street despite receiving a letter from the library, (co-signed by other organizations based in the area), advocating that the speed limit there should be be lowered from the current 50 km/h down to 30 km/h. The change, in effect, would have made the area around the library, arena, Seniors’ Center and pool a designated playground zone.
Coun. Chere Brown asked for a formal vote from council on the matter.
“To me that whole area is a playground zone,” she said making the motion to lower the speed limit. “We have youth there, and, forward thinking, we do want to look after our youth. I don’t want any of them to get hit. I look at right across the street and there is a basketball court right in the parking lot. And I do think with the youth centre being right there, the library which is used by a lot of kids. I support lowering the speed limit there.”
Coun. Dwight Kilpatrick was the most vocal opponent of the motion, asking for a rare recorded vote on the issue.
“The reason why I am opposed is I drive on that road multiple times a day,” he said. “When you get to the four way stop from Third after driving all the way up Main, it’s like you come to an opening. There are no buildings anywhere near the road all the way up to Main centre. When you look at how open that space, and there are sidewalks on both sides of that road, and every building has its own parking lot or offsite parking, there is just never any congestion.”
Kilpatrick said he had confidence if there were a real problem with speed in that area the RCMP and the town’s bylaw officer would have said so during their regular reports to council.
“The police aren’t recommending any changes. Our bylaw guy isn’t recommending any changes. Nobody is recommending any changes except the library. And I don’t even know why it is their job to be worried about… The last accident with two kids getting run over was at a four way stop. Tell me how that happened. (Main) is a very busy road, and you are going to slow everybody down for I don’t know what.”
Coun. Eric Solberg echoed Kilpatrick’s point.
“I would have to agree with Dwight on this one. It is one of our most open roads. To put that down to 30 km/h, you would have to go 30 km/h in the entire town. There is just too much congestion elsewhere that is widely more important than this. My kids go to and forth to the arena, to and forth to the swimming pool and the youth centre. We don’t drive them. They go on their own, on their bikes, and I am okay with that… And we have no concerns about Main Street.”
Brown said, in response, she was concerned about another type of congestion.
“When you say congestion, that area is also congested with a lot of recreational facilities for that area. That area is very ‘congested’ with things to do with our children.”
Mayor Ernie Reimer then weighed in. He said when he had first heard about the issue, he had been inclined to support the speed reduction, but had since changed his mind.
“To me it’s not a playground zone,” stated Reimer. “There is no playground equipment there. When you get people playing basketball in the arena, they are well back away from the road. So I don’t think that poses a hazard. But maybe we can put something in our regular newsletter stressing our desire to have people slow down in those areas, especially when there are kids or pedestrians close to the vicinity.”
Coun. Cathy Crozier said she too had heard no facts from local law enforcement officials which would indicate a change is needed.
“Mr. Mayor, I look at the data collected by the RCMP, and I don’t see any indication people are flying through there. I seriously doubt my own car could get up to 50 km/h by the time I hit the library from that four way stop.”
The final vote was 4-2 against Coun. Brown’s motion. Mayor Reimer and Couns. Kilpatrick, Crozier and Solberg voted against. Couns. Leipert and Brown were in favour. Coun. Jim Steinke was absent.