Solar dreams on display in Suffield at open house 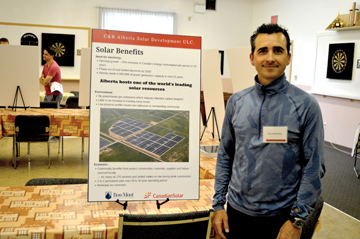 Photo by Tim Kalinowski- Ian Sanchez of Bow Mont Capital and Advisory was on hand in Suffield to tout his company's possible 200-acre project at an open house at the Suffield Community Hall last Monday. If approved, the the project would be built in 2019.

By Tim Kalinowski
Last Monday afternoon the Suffield Community Hall hosted an open house by Calgary-based Bow Mont Capital & Advisory and Guelph, Ontario-based CanadianSolar. The joint endeavour  hopes to establish a 200 acre solar panel array about 10 km northwest of Suffield by the spring of 2019. The array would be made up of about 91,000 modules, (3×6 feet each), and would potentially employ about 150 people during the construction phase, and two permanent technical maintenance crew members in the region once completed. Power generated by the array would be sold back to the Alberta electrical grid.
Cypress County and AESO, (which operates the power grid in Alberta), have yet to approve the project, which is still in the public consulation stage.
Mark Feenstra of CanadianSolar said he hoped the obvious benefits of the project would resonate with government officials when it gets to the permit stage.
“We are excited obviously to be talking about some employment opportunities and local construction jobs,” he said last Monday during the open house. “I think in this market that is beneficial. And we, ultimately, look forward to help offsetting greenhouse gas emissions, which is the larger goal. We are excited to be here and be part of the larger community.”
Ian Sanchez of Bow Mont Capital & Advisory said the location near Suffield looked ideal for the project’s needs.
“Southern Alberta, in general, has a very good solar resource; that’s why we are attracted to southern Alberta,” he said. “What we look for when we place a project is existing electrical substations, and so this one is quite close to an electrical substation. And there is an existing distribution line that runs from the substation all the way on the north side.”
Coun. Alf Belyea, Cypress County’s Suffield representative, was on hand to help serve coffee during the open house and to pose his own questions to the developers.
“I think this open house is a very good idea. It gives people an insight into what solar power is all about,” explained Belyea.
Belyea stopped short of endorsing the project, but was glad the public had the opportunity to get information on the proposed solar array right from the horse’s mouth, so to speak.
“I don’t know if it would be a good fit or not, but we are looking toward the future and this is the future, I guess. The open house gives us a chance to see what they are offering first hand.”