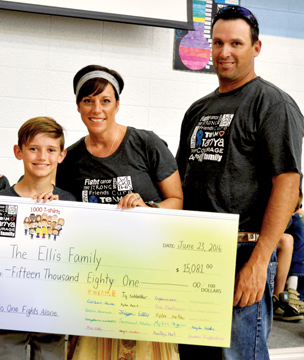 Photo by Tim Kalinowski- The Seven Persons School Grade 5/6 class successfully sold 1,270 "Team Tanya" T-shirts and raised over $28,000 during the campaign. Pictured: Tanya and Tim Ellis accept a cheque from Rylan Dent for $15,081. The donation will help with Tanya's cancer fight.

By Tim Kalinowski
Seven Person School celebrated a very successful end to their  Grade 5/6 class “1,000 T-shirt” campaign to benefit Hope for Haiti, the Children’s Wish Foundation and the Tanya Ellis family last Thursday with an exciting rally in the school’s gymnasium. The whole school celebrated with the Grade 5/6’s, with many special guests coming in from all over to take part.
The campaign, which kicked off in January, ended up not only meeting, but exceeding, its goal. The students sold 1,270 “Team Tanya” T-shirts and raised $28,891 to send its campaign over the moon for the three causes they supported.
A cheque for $3,810 was given to Hope for Haiti to build an art room for a school in that country. A cheque for $10,000 was given to the Children’s Wish Foundation to help grant the wish of a local child with a terminal condition to receive one final wish. And $15,081 was donated to the Ellis family to help Tanya Ellis pursue further treatment for her Stage 4 colon cancer, and the costs associated with that treatment.
Ellis, who is a teacher’s assistant at Seven Persons School and whose son Trigger was part of the Grade 5/6 class, said she was very proud of the kids’ efforts.
“I am very excited for the kids,” she said. “I think they have grown immensely through this project. And I think they have learned they can set their goals high throughout life and be able to achieve them. It’s also kind of humbling. I have always found that it is much better to give than it is to receive. It feels awkward to receive today, but I am blessed that it will go toward helping my family, hopefully, reach their goal of becoming cancer free.”
Sherry Rissling, principle at Seven Persons School, gave a huge amount of the credit to Tanya Ellis herself, who taught the kids to strive for their goals when she helped raise money to build the school’s new playground equipment a few years back.
“She showed us the potential for how we could actually make a difference for other endeavours. We have just taught them all to give back and make a difference, and be the best they can be.”
Rissling went on to say if Tanya was the one who had helped the children learn they could achieve anything if they put their minds to it, it was the children themselves who took that lesson to heart during their  six month long 1,000 T-shirt campaign.
“I am very proud of our students for taking on this initiative,” said Rissling. “It’s absolutely heartwarming. This is what we want for our kids to teach them to be really great citizens and to make a difference in the world both at home in their community and internationally.”
Mrs. Dola, the Grade 5/6 class teacher who helped organize the campaign, echoed her principle’s praise.
“We have been amazed by the generosity of our community, our families and friends and perfect strangers,” said Dola. “We have received numerous cash donations. I can’t even mention everyone, because so many people have done things to help us out. It makes me really proud to see what we have accomplished. The kids are amazing. This has been beyond what I thought would happen when we started. It’s been worth it all. I think the payout from this (to the students and community) has been huge.”
Special cheque presenters and speech makers on the day from the Grade 5/6 class were Evi Neubauer, Eli Lavoie-Pierzchala, Cheyanne Zorn and Rylan Dent. Bill Yuill accepted a beautiful “Helping Hands” painting made by all the Grade 5/6s on behalf of the Margery Yuill Cancer Centre. And Seven Persons School student Jayla May received “Thor the Monkey”, who was the mascot of 1,000 T-shirt campaign, for her efforts to raise awareness by getting the most likes of anyone on Facebook while wearing a “Team Tanya” T-shirt. 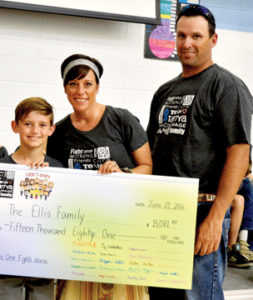 Photo by Tim Kalinowski- The Seven Persons School Grade 5/6 class successfully sold 1,270 “Team Tanya” T-shirts and raised over $28,000 during the campaign. Pictured: Tanya and Tim Ellis accept a cheque from Rylan Dent for $15,081. The donation will help with Tanya’s cancer fight. 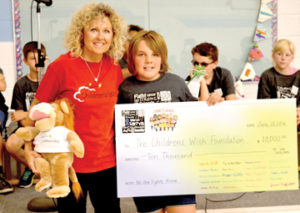 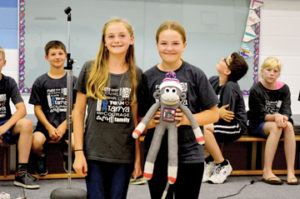 Photo by Tim Kalinowski- Evi Neubauer (left) presents “Thor the Monkey” to Jayla May to help raise awareness to the students’ 1,000 T-shirts campaign.