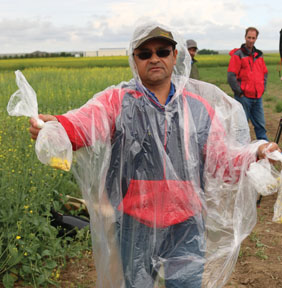 Photo by Jamie Rieger Hector Caracomo gave producers and agronomists an overview of the various insects that can be challenging for farmers in southern Albertaat the recent Farming Smarter field tour.

Participants at the recent Farming Smarter field tour in Cypress County heard a very interesting presentation from a leading research scientist who specializes in insects and pest management.

During the field tour, held earlier this month, he focused on just a few species of insects that are a concern to producers in southern Alberta, including the pea leaf weevil, flea beetles, and Lygus bugs.

“There’s been a large outbreak of pea leaf weevil in south and central Alberta. We see a lot of ugly damage done and it looks bad, but it’s not the worst thing to worry about,” said Carcamo. “The larvae of the pea leaf weevil is very sophisticated, very specialized. The insect seems to like humid conditions and it is the first year for them in central Alberta, but not big news around here.”

Carcamo went on to say that flea beetles and pea leaf weevils have similar lifestyles.

“For flea beetles, we know canola can handle a 50 percent threshhold, but we use 25 percent because it can advance very quickly,” he added.

Prior to his presentation, Carcamo completed 10 sweeps in a canola field gathering bugs that infect canola, primarily Lygys bugs, finding only five Lygus.

“Our Lygus here are non-local to the region, but there are four different species in Alberta,” said Carcamo.

What adds to the challenge of dealing with the Lygus bug is that there may be one to three generations of them in a growing season.

“They will over-winter off the field, in tree shelters, etc. so crop rotations do not work with them. You can have two generations a year over, so there can be an overlap of different life stages,” he said.

Carcamo noted that recent precipitation, including the day of the field tour may have played a role in the low economic threshold numbers in southern Alberta.