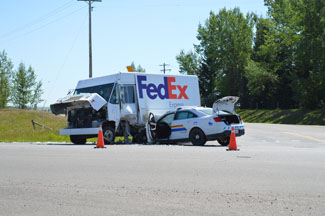 A police officer from the Bow Island RCMP Detachment sustained minor injuries and was transported the Medicine Hat Hospital where he was treated and released a short time later.

Traffic is currently being re-routed on Township 120, and Highway 3 remains open. A collision analyst from RCMP Traffic Services will be attending the scene to investigate.

If you witnessed this collision, or have any information, please contact Redcliff RCMP at (403) 548-2288.