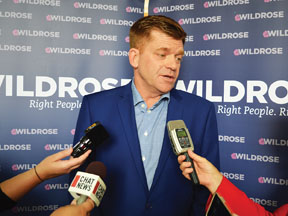 Wildrose Party leader Brian Jean was in Medicine Hat last Wednesday speaking to local party supporters, and reminding them of the party’s fiscal conservative brand. The Wildrose has had a good summer by most polling accounts, but Jean faced repeated questions last week about his party’s stance on uniting the right in Alberta.

“I would say our membership is evenly divided on that issue, much the same as the PCs are,” stated Jean. “We’ve looked at opportunities through polling to see where people are on that particular issue. And they are all over the map. But I will tell you one thing they are not divided on. They are not divided on our message and how we’re going forward, and our vision for Albertans for the future on smaller government, a more accountable government, a government which actually looks to everyday Albertans to lower their taxes and to provide what they need by way of quality of life.”

It was a nifty pivot by the party leader, but it did not stop questions on the issue. When pressed, Jean said he will do what is right for his party, and take his orders from the party’s membership going forward if some kind of unified brand becomes a priority.

“To be clear, the Wildrose members are in charge of this party. It is not the leader or the elected officials, but the members themselves who set policy and decide on the long term ramifications for our party and the future of our party,” stated Jean. “As the leader, I am going to make sure to protect the rights and privileges of the Wildrose members, and I assure you I will do that until I am no longer the leader.”

He continued on to say that until the issue is decided one way or the other he and his caucus will continue to do their job as the Official Opposition to the best of their abilities.

“All I know is what I was hired to do, and that is to focus on opposing the NDP’s ideological agenda as it comes along, and make sure I provide plenty of ideas, big and small, to Albertans so they will elect the Wildrose government in the next election. To do that we need to be winning their hearts and minds every day.”

Jean said Albertans have spoken clearly about what their biggest concerns are, and the Wildrose was listening.

Jean said amidst the doom and gloom of the current downturn Alberta’s light continues to shine.

He pointed to the Alberta citizen response to the Fort McMurray wildfire as a prime example of everything great about the province. Jean, who also lost his home in the fire, said he was grateful to everyone who gave of their time or opened their homes and wallets to those in need.

“That has been such an uplifting experience for me,” said a smiling Jean. “No matter if it’s fire or flood, or whatever the circumstance, I know Albertans are resilient and tough enough, and independent enough, to be able to get through it. And they are going to get through (this downturn) better than ever. I am absolutely certain of that.”

Jean said thousands had been coming out all over the province this summer to hear him speak and to give feedback on the issues which matter to them.

“It’s been humbling to see the turning out of, literally, thousands Albertans right across the province. Not matter what size town, village or city, we have hundreds coming out to listen to our message and sharing their vision for the future of Alberta. It’s been fantastic.”