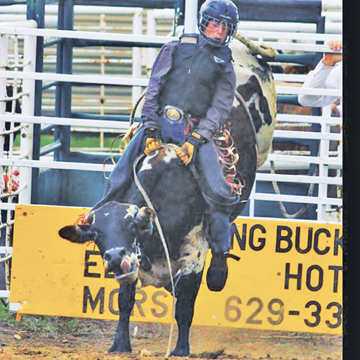 Photo submitted by Tyler Mitchell- Bow Island's Tyler Mitchell will be competing in the CRA finals in Brooks in October and is planning on moving up from steer riding to junior bull riding for next year.

By Jamie Rieger
They say when you are passionate about something, you soak up all you can learn about it and spend as much time doing it as you can fit in a day.
That certainly holds true for Bow Island’s Tyler Mitchell when it comes to steer riding and rodeo in general.
The young steer rider, who has qualified to compet at the Chinook Rodeo Association finals in Brooks this October, learns as much as he can from all sides of the rodeo whenever he has the opportunity.
When he isn’t strapped onto the back of a steer competing at rodeos throughout Alberta, Saskatchewan, and sometimes Manitoba, Mitchell can often be found talking to the stock contractors, learning the ropes about the business, and just helping out wherever he can.
In fact, Mitchell, who has an entrepreneurial spirit, talks about forming a partnership with a friend and becoming a stock contractor. It’s something they have been discussing for quite some time.
For now though, Mitchell plans on moving up to junior bull riding and is looking to practice at the Silver Sage arena in Brooks this winter.
“I started the season out pretty good at four rodeos, then had some where I didn’t do very good,” he said.
Mitchell suffered a thumb injury which knocked him out of competition for a bit, but once he was healed and back competing, things turned around.
“Right after my injury I started making some money and really have been lucky as far as injuries go,” he said.
Grandma Carol Seabrok can often be found in the stands cheering on Tyler in steer riding and his sister, Trista in barrel racing. Some weekends, the two have rodeos in different places, so Seabrok is often with one of them.
“This is something he really likes and it keeps him out of trouble. When you are at the rodeos, you meet other parents and grandparents who are doing the same thing,” said Seabrok.
It isn’t all about rodeo when they are on the road. Seabrok makes sure Tyler and Trista learn about the places they visit along the way, including touring the tunnels at Moose Jaw this summer.
Mitchell, who was sitting in 6th position in the CCA standings with just two rodeos left in the season, may yet qualify for those finals as well.
Mitchell, who is entering Grade 10, also works at Tempo Gas in Bow Island and is learning how to rope by Henry Kielstra.
“Then, I can compete in another event and can go for high-point,” he said.
It’s no surprise that the young steer rider is looking for more ways to capitalize on his efforts and working toward some new goals.
Other local finalists who will be heading to the Chinook Rodeo Association finals in Brooks from Oct. 28-30 are:
Taylor Wudrich- team roping
Chrissy Kielstra- breakaway roping
Ally Kielstra- junior barrel racing
Kale Hughson- novice horse riding
William Barrows-steer riding
Quade Hughson- steer riding