It takes a village; how a future Olympian found her stride 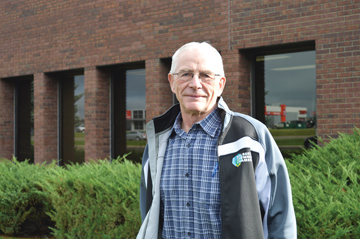 Photo by Tim Kalinowski- Bill Watson says his granddaughter, Sage's success was in part thanks to the efforts of those who had the strength of vision and commitment to build a first-class track facility at Crescent Heights High School in Medicine Hat.

By Tim Kalinowski
It takes many years to build up a successful business, decades to build up a quality cattle herd and generations to build up the institutional capacity to create an Olympic calibre athlete; these are all things Bill Watson, grandfather of track champion Sage Watson, knows well.
“It takes a village to raise a child, and that comes very much into play here,” states Watson, a retired Phys. Ed. teacher in Cypress County. “Had we not had the wonderful track and field facility here at Crescent Heights, Sage would not have had the start she did. It’s a state-of-the-art track. Again that goes back to Dr. Ken Sauer and his leadership in getting that built. There were about six of us on that committee. We didn’t know back then that we were building something for a future Olympian to start on. But even at that time, I knew Sage had excellent talent.”
Watson has always emphasized to his children and grandchildren the importance of both mental and physical education to be successful in life.
“I encouraged competition and sports from an early age,” confirms Watson. “I always said if you are going to do something, do it as well as you can. I think the more education you have, the more worldly you become. And the more you understand the things that are happening around you. And the more you understand the importance of physical fitness and competition, and the more you have a desire to succeed at things.”
He continues.
“In Grade 12 the family knew already that Sage needed a little more coaching than was available here. At one point she had record in the 100 metres, 200 metres and 400 metres provincially. We knew she had something special, and we encouraged it. Her dad (Wade) was in contact with a coach in Calgary. So she started to go to Calgary her Grade 12 year. She drove to Calgary most weekends all year long. And, of course, she was also able to run indoors in the winter. In Calgary there were also other girls just like her in track, and she was able to make good friendships there. That was the last piece of the puzzle she needed. That good environment to help her move to the next level.”
Bill, who is co-owner in the Watson Cattle Company, says Sage learned a lot about seeing the big picture from the family’s cattle business.
“I think raising cattle, especially raising pure-bread cattle, you have to be competitive there,” he states. “You have to want to try to have the best, and a product other people are going to want to want. Again, the family connection goes way back there; my great grandfather won the Canadian Championship for his bred cattle in 1906. So we have generations of drive and achievement there.”
Watson is grateful for all the support Sage has gotten in the area as she continues her drive to be the best in her sport. He emphasizes again the idea of it taking an entire village to lay the groundwork for an individual’s success; even if it is the individual, in the end, who has to find deep down inside their own drive to be a champion.
“It’s a composite,” confirms Watson. “In one aspect you have to have some innate, God-given abilities… You have to have that drive to be a champion. And family comes in there too. You have to offer that encouragement… The support and encouragement Sage has been getting here at home makes me feel very proud and very blessed. It’s nice to have the home front supporting the whole effort.” 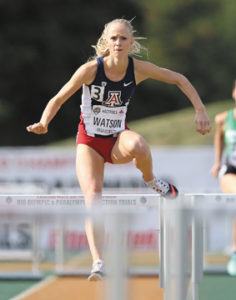 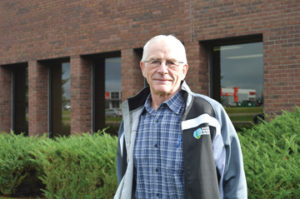 Photo by Tim Kalinowski- Bill Watson says his granddaughter, Sage’s success was in part thanks to the efforts of those who had the strength of vision and commitment to build a first-class track facility at Crescent Heights High School in Medicine Hat.