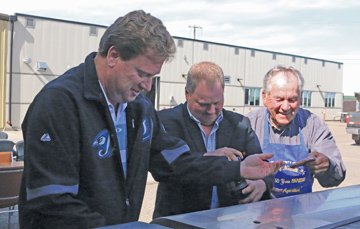 Mosquito Menace
Cypress County Agricultural fieldman, Jason Storch addressed council at their Sept. 6 meeting, seeking guidance on mosquito control after receiving phone calls from people in Irvine.
“Our general stance was no control, but in recent years, we have gotten phone calls from Irvine School to do some mosquito control on standing water,” said Storch.
This summer, Storch also received calls from residents in Irvine, Seven Persons, and Walsh.
Storch presented three recommendations to council, with Coun. Art Squire moving to spray within the hamlets.
That motion was defeated with a vote of 3-5.
Coun. Richard Oster then moved to accept Storch’s recommendation to provide the service, but only for school areas where there is standing water. Council voted 7-1 in favour of that motion.

Gordie Forbes of Cottonwood Livestock was on hand as Cypress County council debated what to do with the road (Range Road 92) that runs by this his place. The road is due for a major rebuild on the 2017 county road construction plan, but the Forbes family has repeatedly told council they do not feel they need to have the work done, as the current road suits their needs fine, and they are the main users of the road.
However, as it is a county road, council has been concerned about liability issues and wants to ensure the road meets all safety standards. County staff had initially proposed three options for councillors to consider last Tuesday. A reconstruction on the hill portion of the route at an estimated cost of $485,000. Redoing the current road to a high grade standard at a cost of $1.3 million or rerouting the entire road and rebuilding it at a cost of $1.6 million.
Councillors rejected the reroute after allowing Mr. Forbes to speak on his preferences. They did not like the budget figure of $1.3 million to redo the whole road, and do work, as Coun. LeRay Pahl stated, “nobody wants.” And councillors did not feel they had enough of breakdown on what would be entailed in spending the $485,000 to fix up the hill portion. The job would also take, as it stands, the lion’s share of the $1.6 million set aside annually for the road reconstruction program in 2017. Council asked staff to return next meeting with a more thorough cost breakdown for the Forbes Hill project.

Cypress County councillors were put to work barbecuing up burgers for over 100 County staff over the lunch hour at last Tuesday’s meeting. The County usually puts on an end of summer meal to thank staff for their hard work and to say a farewell to their seasonal workers for another year. This year councillors opted to barbecue for staff themselves, much to the entertainment of staff members and reporters watching on. Coun. LeRay Pahl presided in his apron as the maitre de barbecue (chief flipper) and promptly took the upwind side of the range. Coun. Garry Lentz, on the other hand, came out of his flipping labour hair standing-on-end and well-smoked after being on the downwind range. Many reliable sources witnessed Reeve Darcy Geigle stirring the pot— the pot of barbecue sauce that is.