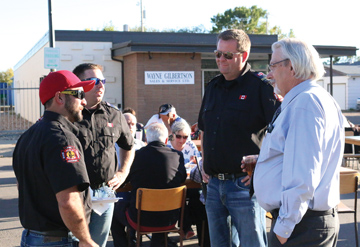 By Jamie Rieger
Dozens turned out on Friday evening in front of Servus Credit Union for a ham supper to help raise money for much-needed equipment for the local volunteer fire department. The money raised will go toward purchasing new breathing apparatus for department members.
“Our issue with our breathing apparatus is that they will become unrepairable in the next few years, so we have to replace them,” said volunteer firefighter Bill Veilleux, adding that the replacements cost $6,500-$7,000 and the department will need 18 sets.
Of the many people who showed up to support their local fire department, mayor Gordon Reynolds said, “It is good to see the community come out and support our fire department. We are tremendously proud of all the work they do.”