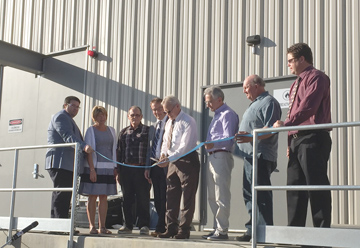 By Tim Kalinowski
Redcliff held a very special ribbon cutting ceremony to celebrate the official dedication of its new water treatment plant last Friday afternoon. The dedication included not only the ribbon cutting ceremony, but also an extensive tour of the treatment plant itself followed by a barbecue supper. A number of VIPs were on hand to hear about all the work that went into getting the plant off the ground, including MLAs Drew Barnes and Bob Wanner, as well as Mayor Ernie Reimer and several town councillors.
Ernie Reimer, dressed up in a spiffy suit and tie, said he could not be more proud to be Mayor of Redcliff as it celebrates the completion of the biggest infrastructure project in town history.
“It started last February when we opened the valves to the town to start bringing in new, refreshing, clean water…  But today we are super excited to celebrate this grand opening. This is an exciting time for me as Mayor. This is the biggest infrastructure project that Redcliff has ever had. To be a part of it, especially at my age, it’s awesome. It’s special to me, for sure,” he said.
Mayor Reimer was also grateful for the provincial government’s support, both moral and financial, in helping Redcliff get to this completion stage.
“We do need to thank the provincial government for their support for this project,” he explained. “As we got further into it, we found out there was more things like pipes, and pumps, and things of that nature that had to be replaced. So we had to go back and seek some more funding. They were very gracious in giving us the money we asked for, and so we thank Mr. Brian Mason, (Minister of Infrastructure and Minister of Transportation), his staff, and our local MLAs Drew Barnes and Bob Wanner for all their contributions and the hard work that they did.”
MLA Drew Barnes, who represents Redcliff in the Alberta Legislative Assembly, said projects like the new Redcliff Water Treatment Plant were well worth supporting, regardless of your political stripe.
“It is s an impressive facility that means a lot to meeting the needs of our citizens and growth going forward,” said Barnes. “(Mid-sized) towns like Redcliff are absolutely crucial to the values of Alberta and growth of Alberta. It’s important all ratepayers get supported by our tax dollars.”
Medicine Hat MLA and House Speaker Bob Wanner represented Minister Brian Mason, who could not attend in person. Wanner said his government was committed to doing infrastructure projects like Redcliff’s treatment plant all across the province, for some very good reasons.
“It’s a health issue, it’s about job creation and it’s about community revitalization,” he said. “I think it is pretty core stuff to the future of our province…. When we work on projects like this in a collaborative model, the whole ship rises in the bay.”
Wanner commended the dedicated and hardworking staff of the Town of Redcliff, and its political leadership, for completing such an ambitious project with one eye firmly fixed on the future.
“It looks to me quite exceptional and outstanding,” said Wanner. “It takes a huge team to build something like this at all levels. When we can find ways of saying “yes” together, then we all win.” 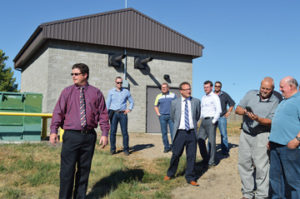