Sakamoto to run for Liberal Party in Oct. 24 federal byelection 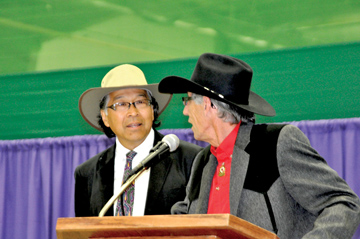 Photo by Tim Kalinowski- Stan Sakamoto (left) listens as President Norm Smith praises his 25 years of culinary service to the Stampede at the President's Luncheon Thursday.

By Tim Kalinowski
Last week Stan Sakamoto declared his candidacy for the Liberal Party of Canada in the upcoming Oct. 24 Medicine Hat-Cardston-Warner byelection to replace former MP Jim Hillyer.
Sakamoto is a well known business owner in Medicine Hat, and his catering company, Shooting Star Events, provides services to many charitable, corporate and public organizations. Sakamoto also farms south of Medicine Hat. His family moved to southeast Alberta just after the Second World War.
“I am called a Sansei, which is the third generation,” explains Sakamoto. “My grandparents came over from Japan in the late 1800s and settled in the Vancouver area. My parents were born in Vancouver; so they are second generation called the Nisei. You know the story about the Japanese Canadians who were forced off the west coast? My family chose to move to Alberta and ended up working in Coaldale at the sugar beet fields. They went from being a middle class fishing family owning two fishing boats in the west coast to eeking out a living on the prairies working sugar beets.”
When the Sakamotos moved to Medicine Hat in 1948 they not only found welcome in the community, but also opportunities to be successful.
“My parents started renting some farm land. We grew vegetables and sold them at market square in Medicine Hat. They also both worked at Dominion Glass doing shift work. They were eventually able to buy their own land south of the city and over time was handed down to their three children… There’s no secret to our family’s success. It’s just been a lot of hard work and creating opportunities. That’s the only way you get ahead,” says Sakamoto.
The 66 year-old Sakamoto has seven children, six boys and one girl, with his wife Susan. He is proud they have all gone on to have business, professional or academic success in their own right. He says raising that many kids gives him an appreciation for the struggles of local working families.
“I know what’s it like to struggle. I raised seven kids, you know. At this time of year there school supplies to buy and runners to buy. And kids want the fancy jeans. And there is hockey registration right now… It is a stressful situation in our riding. Sometimes people ask me why I am entering politics, and, to be candid, it’s because we don’t have a voice in Parliament. If I can garner enough support in our riding, that’s my objective: To have a voice in Parliament for our riding and for our constituents.”
Sakamoto has been a Liberal Party supporter since seeing former Prime Minister Pierre Elliott Trudeau speak at a rally at Riverside Park in Medicine Hat in the late 1960s. Sakamoto is proud over 45 years later to stand by another Prime Minister named Trudeau.
“During this campaign, I will be proud to stand beside Justin,” Sakamoto says. “He’s a family man. He’s an educator. In the Japanese tradition, educators are the most revered profession in that culture. They are the senseis.”
Sakamoto admits he has an uphill road to climb in this byelection, but intends to take up the challenge by using hard work, door-to-door engagement and his perpetual sense of optimism.
“We need to hear more hope and optimism in the times we are in,” confirms Sakamoto. “Growing up in this area and becoming a Boy Scout, there is a motto that always goes through my head to this day. I hope I don’t sound silly, but you say: ‘Akila, I will do my best to do my duty to God and the Queen to keep the law of the wolf pack. And to do a good turn every day.’ I use that philosophy in my life. I try to do a good turn every day. Whether that’s opening the door for a lady walking into the grocery store; or when I see someone in need to stretch out and give them a helping hand. Those early values have stuck with me.”