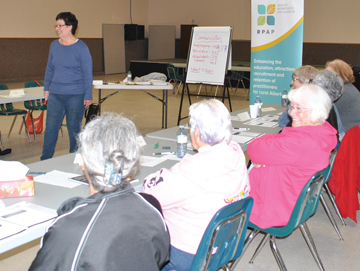 Photo by Jamie Rieger - Bow Island and Foremost residents learn how to better understand different cultures and customs at a workshop hosted by RPAP/Health Workforce for Alberta. The workshop, held in communities who are welcoming International Medical Graduates (IMGs) to their communities. Pictured: Kimberley MacKinnon, RPAP senior community recruitment consultant leads a discussion on communication.

By Jamie Rieger
Moving to a new community can be a stressful experience at the best of times, but moving to a new community where there are cultural differences and numerous barriers to overcome can be even more daunting.
As many rural Alberta communities seek out physicians to come set up shop, many are finding the qualified doctors from overseas, with the physicians, their families, and communities all facing challenges.
As a result, RPAP/Health Workforce for Alberta has been hosting a number of workshops throughout the province to help community members increase their knowledge and skills in welcoming International Medical Graduates (IMGs) to their town.
On Saturday, a workshop was held at the Multiplex in Bow Island as the Bow Island/Foremost area prepares to welcome a new doctor to this area.
“Our goal is to give people in the community a different lens with which to look at and understand people from different cultures,” said Kim MacKinnon, senior community recruitment consultant-south zone for the Alberta Rural Physician Action Plan. “Everywhere you go you run into people from different cultures. We want to be welcoming and accepting. We want to help communities like Bow Island prepare for new doctors coming to town.”
MacKinnon added that more than 60 doctors have been recruited over the past several years.
Bow Island mayor Gordon Reynolds, who participated in the workshop, explained to the group that the new physician coming to the area is from Iraq, but has been living in Toronto for the past couple of years establishing his medical career.
“He attended a prestigious school in Baghdad and has been through three wars. He then went to Libya where he literally practiced medicine under fire,” said Reynolds. “He is very proud of his education and skills and has been working hard to adapt. He is very happy to be in Canada and to be coming to this community.”
IMGs coming to rural Alberta are coming from countries such as Australia, Egypt, India, Ireland, Libya, Nigeria, Pakistan, South Africa, the United Kingdom, and the United States.
Through interactive case studies, the group participating in the workshop learned ways to increase their understanding, make adjustments to their communication styles and behaviours, as well as how to address misunderstandings. Attendees also participated in a card game where nobody was allowed to talk and the rules differed from table to table. As people moved from one table to the next, hand gestures were used to communicate and some said afterward that there was some confusion in not knowing the different rules.
Twenty people registered for Saturday’s workshop. Similar workshops have been held in Milk River, Vulcan, and Cardston, as well as other communities in central and northern Alberta. The workshops are being funded through grants from the Alberta Ministry of Health.
The workshop was hosted by RPAP/Health Workforce for Alberta and was sponsored by the Bow Island and area Healthcare Recruitment Committee.