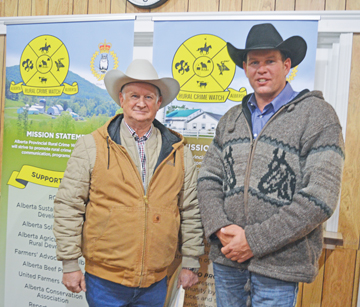 By Tim Kalinowski
Cpl. Christian Reister of Alberta RCMP’s Livestock Section and Senior Brand Inspector Keith Hope of Livestock Identification Services (LIS) paid a visit to the South East Rural Alberta Crime Watch Association year-end meeting and barbecue at Longfellow Hall last Wednesday. Their purpose of their visit was to inform local Crime Watch members and law enforcement officials about how LIS and the LIvestock Section work together to ensure cattle security in the province.
The 6’3 Reister towered over the room in a stetson looking every bit the frontier lawman of old, and beside him stood the sharp-eyed, white-haired Hope, who has seen almost every trick in the book in his many years as a Brand Inspector.
Reister said the relationship the RCMP Livestock Section has with LIS is a close one.
“It’s an excellent working relationship,” he confirmed. “The LIS inspectors all go through a training process, and there is a certificate they need to acquire. We play a role in that. We have certain things we require in court, and all the livestock inspectors are trained. We have a lot of inspectors that have been doing this a long time… They have been through it enough to know what is required for documentation. They have an eye for problems and really good local knowledge.”
Hope concurred but deferred to Reister when asked about the slickest trick he had ever seen.
“We can’t let the secrets go,” he said with a chuckle and a twinkle in his eye.
Reister also declined to tell trade secrets, but said Brand Inspectors and RCMP officers deal with a lot of cases of missing livestock each year, not all related to criminal activity.
“Generally, there about 600 head that go missing in the province every year. There was a few years where it was a bit higher, but, generally, that number has been about the 600 mark. It’s really tough to put a number on how many potentially could be a mismanagement issue where a producer may not have accurate numbers. Or there could potentially be some strays. There could be some deaths due to predators. It’s really tough to know how many are due to criminal activity. The fact is some producers just don’t know how many animals they have to within 10 or 20.
“Oftentimes in these large open areas (like Cypress County),” he concluded, “or in treelined areas like we have to the west of here, producers don’t know if they are missing any until they actually capture and wean their calves and get an accurate count.”
Reister added that local cattle producers should not hesitate to call either their regional Brand Inspector or the RCMP detachment if they suspect rustling or malfeasance.
“A complainant may either call the local Brand Inspector that they are missing livestock or they may go to the local police detachment and we would share that information back and forth. And then we will investigate it together. The RCMP may take the actual lead on the criminal investigation, but with the assistance of the local Brand Inspector. The Brand Inspector would then act in court as an expert assisting in the identification of the livestock.”
Brand Inspectors can also act unilaterally if suspect animals are found in an auction mart setting.
“It’s all depending on the situation; what we do there is verify the brands,” said Hope. “If we receive notification of a suspicious animal beforehand, we may either hold the livestock or hold the proceeds from the livestock when it’s at a sale.”
Reister explained that traceability standards were becoming much tougher in Alberta, and the GPS technology currently used to tag and track cattle was improving every day. However, he stated, brands and the Brand Inspectors remain the most important security system ensuring the integrity and safety of the livestock market today.
“The technology is very close in terms of different tags and stuff where there is a GPS traceability component, but, at this stage, they are not where they need to be,” said Reister. “There are some things on the horizon, and once that technology is available it is going to be of assistance. Having said that, tags can be cut out and I think everybody in the industry, at this point, agrees that a brand is still the best way of identifying your cattle.”