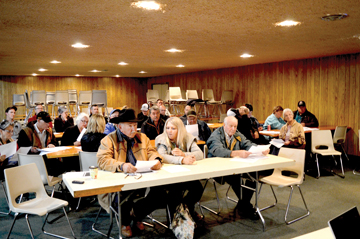 By Tim Kalinowski
The South East Rural Crime Watch Association (SERCWA) held its year-end barbecue and meeting at Longfellow Hall south of Dunmore last Wednesday night.
About 25 people were in attendance for the barbecue, and, according to the organization’s President Des Grant, SERCWA has seen improved member participation overall this summer. He is grateful.
“The summer went fairly well. But by our turnout tonight, it looks like we’re doing better. It’s encouraging to see more people coming out.”
Grant said he hadn’t heard about any serious crime incidents in the county this summer, but SERCWA remained worried about economic problems in Alberta potentially leading to more criminal activity in rural areas down the road.
“We are still concerned about increased crime in community because of the decrease in jobs,” Grant confirmed.
S-Sgt. Sean Maxell, commander of the Redcliff RCMP detachment, was also in attendance at the year-end meeting. He said his members are not so far seeing any greater spikes in crime in the county and surrounding area this year.
“Currently, anything we are dealing has the tendency to do with property crime right now. We have had the odd break in in the area, and reports of some suspicious activity and vehicles, and maybe some odd worries or odd issues with cattle. That’s the majority of what we are dealing with.”
Maxwell commended the “police friendly” nature of local citizens, who often call in when they see things which are suspicious. Maxwell stressed the importance of remaining vigilant.
“If somebody sees something that is suspicious or they have questions about, call it in. The worst case scenario is we go out there and end of finding someone who is doing something legitimate. The point is, we found out about it and we went and looked.
“It never hurts,” continues Maxwell, “if someone sees something suspicious to write it down: Date, time, make of vehicle; or a licence plate, if you can get. It might be nothing, but you just don’t know.”