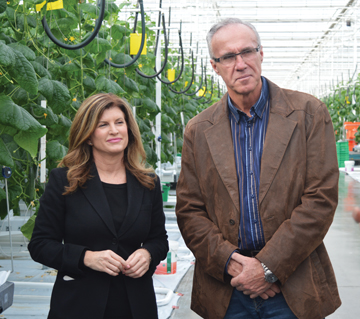 Photo by Tim Kalinowski- Conservative Party interim leader Rona Ambrose stopped by Country Fresh Farms when she visited the region last week ahead of the byelection in the Medicine Hat-Cardston-Warner riding. Conservative candidate Glen Motz (Pictured with Ambrose) won the seat with close to 80% of the vote.

By Tim Kalinowski
Conservative Party leader Rona Ambrose visited Cypress County and Medicine Hat last Thursday to drive home her anti-carbon tax message and to support local candidate Glen Motz. The visit by Ambrose could be seen a measured response to the Prime Minister’s visit the week before to support local Liberal candidate Stan Sakamoto both in tone and in stated purpose. As opposed to the Trudeau visit which focused on creating stir, excitement and flash, Ambrose chose a lower key approach by touring a greenhouse in Cypress County and visiting with local Conservatives in more private settings. She attended one public event, a 400 person campaign rally at Glen Motz’s riding office on Thursday afternoon.
The personable, but more subdued, Ambrose is cut from a different cloth than Trudeau, preferring a firm handshake and one on one contact to a large group love-in or a hug and a selfie. Ambrose was laser focused on the carbon tax issue for much of her visit, bringing most speeches and interviews back to that subject in her whistle stop in the riding.
“I am here with Glen Motz for a very good reason,” said Ambrose to a group of three local reporters, (no national media coverage or big entourage), at County Fresh Farms on Thursday. “I care about Alberta. Glen cares deeply about his community here in Medicine Hat. And we want to send a message to Trudeau that his carbon tax is bad for Alberta, bad for the agricultural sector, and is bad for the oil and gas sector; particularly at a time when this province is hurting. The message I would have to the people in this region is you need to have a representative that going to stand up for your region. Mr. Trudeau is not doing that. We have a job crisis here in Alberta, and his answer to that is a carbon tax at the worst possible time.”
Ambrose acknowledged there was no easy solution to the poor job situation in Medicine Hat-Cardston-Warner when asked what her party would do differently from Mr. Trudeau’s.
“There isn’t a special, magic sauce, but there is no secret to the fact that when you have a competitive tax environment, when you have competitive wages, you can create jobs. When people start to feel they can’t open up a new business, because the wages are too high, or the input costs are too high, there’s too many taxes… They are going to move to a jurisdiction that is more business friendly. We have a government in Alberta and Ottawa that is not friendly to business,” she stated firmly.
Ambrose also poured cold water on the idea that Medicine Hat-Cardston-Warner would gain any benefit from having an elected Liberal in the region as opposed to a Conservative.
“I have not seen anyone who is an elected Liberal in the House of Commons fight for Alberta,” said Ambrose. “I have not seen one of them talk about how a carbon tax is going to damage the economy. I have not seen any of them get up and raise issues around pipelines. Bottom line is, they (the Alberta caucus) are not an important part of the Liberal government… We (Conservatives) fight for jobs, for families, for hardworking, ordinary Canadians. And for low taxes across the board; no matter what the region is.”
At the end of Ambrose’s scrum, Glen Motz further spoke about the difference in tone and style between his party and the Liberals.
“It’s a family,” said Motz. “It’s not just us fighting here. It’s other people who believe in our Conservative cause and the people of this riding and the issues of the province, and want to demonstrate that by their presence and speak on behalf of what we are doing. I think it has been a stark contrast between the visit of the leader of the Opposition and the Prime Minister is what was the Prime Minister’s purpose? A photo op, pep rally, and gone. Did he talk to businesses? Nuh-uh. Did he meet with individual people? Nuh-uh.
“This leader said I am coming here: a) to support you, Glen. And b) I want to meet businesses that are going to be impacted by some of the decisions being made in government so I can go back and advocate on their behalf. That, to me, speaks to the difference between these two parties.”