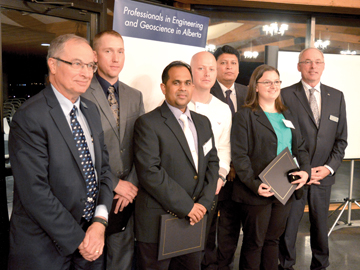 By Tim Kalinowski
The Association of Engineers and Geoscientists of Alberta (APEGA) Medicine Hat branch held is annual member induction ceremony at the Medicine Hat Golf and Country Club last Wednesday evening. APEGA is the body which regulates and guarantees professional engineering standards in the province.
Last week’s dinner and ceremony saw the induction of and swearing of the engineers’ oath by five new local members: Cory Holt, Siobhan O’Connor, Sandeep Pareek, Curt Robert Stamberg and Rawle Ramolachan.
Veteran local engineer Vic Janz also received a lifetime membership for APEGA in commemoration of his services and dedication to the southeast Alberta APEGA chapter. Craig Maunder and Spencer Torrie both received their five-year pins.
Local branch chair Said Yussuf served as M.C. for the event and past chair Spencer Torrie opened the evening with the prayer before dinner. VIPs in attendance were Mayor Ted Clugston, Coun. Les Pearson, MLA Drew Barnes, Dr. Denise Henning, Chancellor of Medicine Hat College, and APEGA president Dr. Steve Hrudey, P.Eng.
After a delicious supper and the induction ceremony, Dr. Hrudey gave the keynote address for the evening, spending most of his time talking about the importance of preserving self-regulation among engineers and geoscientists in Alberta. But he also laid out the grim picture facing engineers and geoscientists in Alberta due to the current economic downturn, and the subsequent loss of jobs in the oilpatch.
Hrudey brought in statistics that show about 15 per cent of engineers in Calgary are unemployed at the moment and about 21 per cent in Edmonton. That is in stark contrast to the national unemployment rate for engineers which is between zero and 1.2 per cent, depending on province and region. And some fields in geoscience in Alberta have been hit far worse, with some stats indicating nearly 50 per cent unemployment at the moment.
“It’s a brutal market out there,” summarized Hrudey. “And we have to be realistic about this. We are faced with stickhandling in a telephone booth… The economic reality in Alberta for our members is worse than it has been in at least 30 years. And in a lot of ways it might be worse than the National Energy Program. If for no other reason than that was bad news that blew in from Ottawa. What we are dealing with now is international.”
Local branch chair Said Yussuf said the employment situation wasn’t as grim for APEGA members in southeast Alberta, but there will still engineers and geoscientists currently unemployed and hurting in the region.
“I know that Calgary is worse hit, and the northern communities,” he said. “Obviously Medicine Hat wasn’t spared either, but I think our situation is slightly better because (our local engineering industry) wasn’t as heavily oil driven… But it’s a tough market. We hope there is going to be an upturn. Right now there is a lot of guys taking any jobs they can get just to support their families and pay the mortgage. We don’t know when the situation will improve, but we’re just praying for relief to come by.”