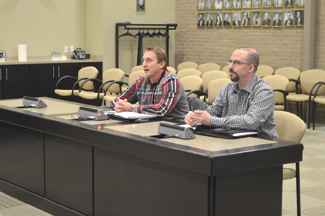 The engineering plans and potential costs of the Cypress Rural Water Co-op were revealed publicly for the first time at last Tuesday’s council meeting. Cypress County council received a delegation from Patrick Wood and Brent Robertson of MPE Engineering to make a presentation during the public portion of last week’s meeting.

Wood revealed that 319 members had so far signed up to be a part of the Cypress Rural Water Co-op. The proposed co-operative would service rural areas just north and south of the TransCanada Highway near Dunmore and Veinerville and extending east toward Irvine to about half way to Walsh, and southwest into the Monarch area near Seven Persons. The estimated cost of building the infrastructure to support the co-operative would be about $12 million. If no grants or supplemental funding can be received from outside sources, the cost per member would be about $40,000.

The system would use a low-flow trickle system which spurs off in eight laterals from Cypress County’s Dunmore-Irvine-Walsh regional water pipeline, the Veinerville gate, as well a Dunmore and Irvine water distribution systems. When constructed the project would use 174 km of pipe.

The Cypress Rural Water Co-op was looking for four asks from Cypress County to move into the next phase of development: 500 Imperial Gallons a day in water rights a day to supply the co-operative’s needs, permission to hook on and adjust the Dunmore-Irvine-Walsh pipeline’s design capacity, upgrades to Veinerville Booster Pump Station to handle the co-operative’s additional capacity needs, and for the County to act as co-applicant for any grant opportunities to co-operative may choose to pursue.

Council appeared open to most of the Cypress Rural Water Co-op’s requests, but balked at the idea of granting of 500 Imperial Gallons in water rights. Cypress County Utilities Supervisor Doren Jensen told council members even the County’s hamlets don’t use that much water in a day. He was also concerned about that much additional strain being put on the Dunore-Irvine-Walsh pipeline and the County’s entire water distribution system.

“In our hamlets right now, roughly, an important number to remember is about a cube (cubic metre) a day,” said Jensen. “At 500 gallons a day that is over two cubes a day. If we go 500 gallons, and 132 services (proposed connections) we are stretching, straining and stressing the system. But, 132 services at less than that, 250 gallons a day or 300, no problem there.”

Reeve Geigle also asked staff if now, at the concept stage, it would be the appropriate time for council to consider designating water rights to the Cypress Rural Water Co-op to get the ball moving on the project. Staff advised against it until the process moved further along.

“It’s kind of a chicken an egg thing,” said Lentz. “You don’t get water rights unless you do the engineering. And what’s the point of doing the engineering if you are not going to get water rights? We need to get things in order, and there has to be a certain amount done before we can actually apply for grants. I believe one of those criteria is we are able to get the water. So if the County won’t allocate water rights, how can the co-op apply for grant money?”

“And the other thing is,” continued Lentz. “if the co-operative doesn’t get grant funding then the whole co-op is probably dead in the water because I don’t think there is going to be enough people willing to put out $40,000 for 500 gallons a day or less.”

Lentz also disagreed with the Cypress Rural Water Co-op being treated like a second class citizen where water usage rights are concerned.

“I am also a little concerned about the double or triple standard here because our development rules state that a large country residential subdivision must have 700 or 800 gallons per day. And if the Monarch development is (eventually) part of a hamlet they are entitled to an unrestricted use like the hamlets are. And yet, the rural customers are supposed to be restricted to 250 gallons a day. That’s a concern to me.”

Coun. LeRay Pahl felt Lentz was demanding a lot, especially because many rural residents were not in as fortunate position as those in his co-operative to have ready access to the county’s water distribution system.

“If anybody could get water down to where I live, I’d kiss them,” said Pahl, who represents the much drier Redcliff and Hwy 523 North in his Ward. “I don’t care where I hook on in the County. If someone gives me potable water. Even if it cost me $40,000, it’s worth it.”

Reeve Geigle suspended discussion on the subject until county staff could return later with some feedback after careful study of the MPE Engineering plan.