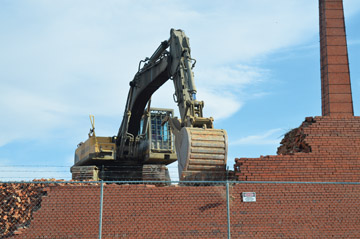 Photo by Tim Kalinowski- Crews were on site at the century-old Redcliff Pressed Brick plant last week to begin the demolition process. The work marks the end of an era in Redcliff's history.

By Tim Kalinowski
Redcliff lost another piece of its industrial history as the I-XL Pressed Brick plant was demolished in the community last week. The plant closed in 2004, and was the last of its kind in town. At one point there were three brickworks in total in Redcliff, all in operation prior to 1913.
The Sissons family built the Redcliff Pressed Brick plant in 1912, and started up mining and brickmaking operations in 1913. The plant operated continuously from that point all the way up until 2004. Malcolm Sissons, current owner of the Pressed Brick site, said last Friday he had considered demolishing the plant in 2005 after operations ceased, but, in the end, decided he wanted to preserve something of this important marker stone in Redcliff’s and his own family’s shared history.
“We entered into some discussions with the Town of Redcliff to ask them what their interest would be in doing something like that,” explained Sissons. “The discussions have been going off and on ever since. Their basic requirement was, in order for them to accept anything in the way of an historic park, it would have to be safe, stable and low maintenance.”
Sissons went on to say the planned heritage park on the site meets all those requirements.
“We will demolish most of it, but leaving the subgrade structures if anybody ever wanted to do an archeological effort on it. So we will just cap that over with clay and grass, but it will be there. We are also going to leave a few of the surface structures; so there will be a small kiln and a small chimney, an outbuilding, and some pieces of equipment. And with one of the big chimneys, we are going to cut it off about 15 feet above grade and have it as a viewing tower. We also plan to build a concrete stage with backdrop wall behind it as a little performance stage.”
Those plans are posted in the Redcliff Public Library if anyone was interested in more information on the subject.
Sissons said while he is excited about the future plans for the site, the occasion is bitter-sweet.
“It was my great grandfather and my grandfather who built the Redcliff Pressed Brick plant; so there is nobody sadder than I am that it is being demolished. But we had to find a solution; something that’s a compromise between the historical aspect and the public safety and stability aspect.”
Local historian Cliff Dacre said the plant’s demolition represented the final footnote on a bygone industrial era in the community.
“The town was a huge, industrial town in those early years,” explained Dacre in a phone interview last week. “It is amazing what was being made here back then. And it was only one of three brick plants operating in the community at that time. The Premier Brick was right on the corner where Broadway turns to go into town on the east side. And the next one closest to that would have been the Pressed Brick, which was eight blocks away. And the other plant, the Brick and Coal, was another eight blocks away on the other side of town.
“Redcliff was attractive to them because of the cheap-burning natural gas here, and also the clay. Premier Brick had a huge pit in there when it was being built. The Brick and Coal got all their clay from the coulees. The Pressed Brick had two huge pits in there, and they extracted clay there for many years.”
Dacre was happy this era in town history would be marked by a new heritage park on the Pressed Brick plant site.
“It is a loss to the town, but it was something that was going to happen anyway. It’s nice to hear there will be some indication of the Pressed Brick being in that location.”
At its height about 100 full time workers were employed at Redcliff Pressed Brick plant. Dennis Rathwell worked at the plant for about 25 years. He remembered it was hard work, but the hours were regular, the crews had weekends off and the pay was decent. He had no complaints from his time there.
“The glass factory was (historically) more important to a lot of people here, but the brick plant was too, on a much smaller scale. At one point, it was really considered the place to work in town.”
Rathwell said the changing economics of the building industry in Canada is what did in the Pressed Brick plant, and other brick and tile companies operating in the region.
“You can go back a number of years, and every major public project— schools, offices and whatever— was all made out of brick. But, over the years, there were a lot of new building materials which came out on the market, and not so many were using the brick.”
Mayor Ernie Reimer’s son Bart also once worked at the Pressed Brick plant. Watching the demolition starting last week, Mayor Reimer said he too was thinking about the importance of the plant as a local employer over the years.
“We had expected it, but it is a sad demolition,” confirmed Reimer. “That plant has been there since 1912… It employed a lot of people, and it supported a lot of local families throughout the years.”
Reimer hoped the new heritage park planned for the site would bring something special to today’s citizens as well.
“A part of our history is being removed from our town, and that’s sad. But time goes on, buildings wear out and they have to be removed… But having said that, the heritage park which is going to go into that spot is going to benefit the town for years to come.”