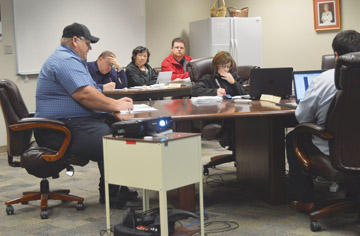 Photo by Tim Kalinowski- Redcliff riverside property owner Doug Turner expresses his shock and anger after being billed $38,000 in offsite levy fees by the Town at last Monday;s public meeting.

By Tim Kalinowski
Redcliff council was confronted with one of the unintended consequences of its new model for the collection of offsite levies in the community at last week’s public meeting.
Doug Turner, who purchased an oversized lot in the town’s River Terrace area subdivision this past summer before the offsite levy bylaw was officially enacted (first reading July 18, final reading Sept. 12), came before council last Monday to protest the $38,000 offsite levy fee assessment recently sent to him in the mail.
“In July, I bought that piece of property from Mr. Vossler, and at that time Mr. Vossler didn’t know anything about any new levies or taxes on that property when he sold it to me,” said Turner. “I went into the Town office, and when I went for a development permit at that time nothing was said about these levies… On the 15th of November I got a letter in the mail. I open it up and it’s $38,000 for levies on the property.”
“My beef with the whole thing is the Town of Redcliff hasn’t spent one wrinkle down there at any point on that property,” he continued. “My question to the Town council is: How can you charge $38,000 on a residential piece of property with no money invested by the town, and there are taxes being collected every year from the place? I don’t get it.”
The area where Turner bought his property was annexed from Cypress County in 2009, and under the annexation agreement residents in the subdivision continue to pay the county’s lower assessed tax rate to the town until 2017. Cypress County, however, has never charged offsite levy fees in rural areas, including within its rural subdivisions; so no offsite levies have ever been paid on the properties there. That changed when Redcliff introduced and passed its new offsite levy bylaw this past summer. All future developments in that zone will be charged $92,000 per hectare.
Mr. Turner’s case is the first ever where the new offsite levy will apply in that subdivision, and could be precedent setting. The large size of the lots in the subdivision are an anomaly in Redcliff, a legacy left over from the annexation.
Turner said it was unfair he should be the first ever to have to pay the massive fee in the subdivision when no other property owner down there ever has.
“Fairness is a word that is used a lot, and it’s also very subjective,” responded Coun. Dwight Kilpatrick. “What I have heard from you is it isn’t fair you should have to pay the town for any of the services they might have to be planning on building in the future. Your idea of fair is you don’t think you should pay anything because it doesn’t seem fair. Fair to a member of council should be everybody buying land, and developing, should help with the future cost of growth. That would be fair.”
Coun. Kilpatrick admitted due the large size of the lot Mr. Turner has purchased, Turner would be bearing a greater cost burden under the current offsite levy bylaw than almost any other residential property owner in Redcliff.
“You have 0.4 hectares. And 0.4 times $92,000 per hectare is $38,000,” stated Kilpatrick. “That arithmetically is fair. Pocketwise unfair. Because your argument is you have one residential lot. If I was to divide one residential lot which is a lot smaller, it would have a lot less offsite levy on it. (Yours) is an anomaly, because those half a dozen lots down there are large. Large enough it is a meaningful hit… Nobody is saying (your situation) is a good place, but there is no good solution either.”
Coun. Larry Leipert concurred with Kilpatrick, but was more concerned by the precedent that might be set for future developers in the community. Leipert said if council chose to make an exception in Mr. Turner’s case, and cap the amount of offsite levy fees assessed per property or something like that, it might set up scenarios where too many other exceptions would have to be made down the road.
“I think what we’re really grappling with right here, and we’re having some issues, is this is a new offsite levy plan. And I agree fairness is important. I think what happens is if we start making some people or some things exempt everybody would want to be exempt, and I don’t know where it would really quit,” he said.
Council chose not to take any action to address Mr. Turner’s situation at this time.
“I paid a decent dollar for the property, and I ain’t paying no $38,000,” said a clearly upset Turner. “So I guess I will have to move on. It ain’t worth it. I will never get my money back out of it.”