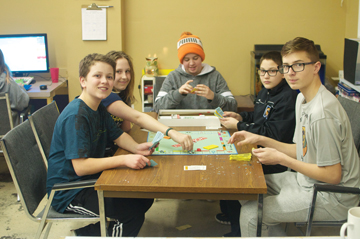 Photo by Justin Seward- Redcliff Youth Centre members have the opportunity after school to socialize with one another through activities such as pool, board games, video games, and cooking.

By Justin Seward
The Redcliff Youth Centre experienced a financial fold recently due to the economic times, and as a result the youth centre faced the possibility of closure if they didn’t get more community support and grant money.
“Basically an area we had been utilizing for fundraising for sponsorhsip evaporated,” said Catherine Wood, youth centre’s volunteer treasurer.
“Everything was hard, a lot of people were losing their jobs.  We ended up having more kids coming in, that means we have to have more staff on.  We were having less money coming in from corporations.  It got to a point where  where money that was suppose to be coming in from programs we were working on and it hadn’t arrived yet.”
However, in the last couple of months the community had stepped in and donated to relieve the financial burden and keep the Redcliff Youth Centre’s doors open and has left the organization in good shape for the future and  they are continuing to apply for all their usual grants.
Wood mentioned for the future of the youth centre and its stability that they have a new board member putting together a business plan to avoid avoid this situation again.
It was then that Redcliff based Pipeline Grazing Association heard the news of a possible closure on the radio and donated $10,000 to keep the Redcliff Youth Centre open.
“It was pretty crucial,” said Ulrich.
“At the Redcliff Youth Centre, we’ve experienced in the past a high turnover in staff, especially for my position alone.  We find being in Redcliff, we’re a little bit secluded from the Medicine Hat area. But with that being said with a high turnover in staff sometimes the necessary things for non-profit don’t get completed, which extremely unfortunate for our youth.”
Pipeline Grazing Association’s vice president Shane Hok said when he first heard about the youth centre’s situation, the company wasn’t hesitant to donate because they felt it was an important place to have open because it was somewhere safe for the kids to go rather than walking the streets.
After a recent visit, Hok found it eye opening with the youth centre was ran because he thought it’s a great centre because of the life skills you learn with cooking together, cleaning up and socializing with one another.
They received a grant from the Community Foundation of Southeastern Alberta for $8,025 to support the dinner program.
Shifting gears into 2017, Ulrich said with the funds that have been received that it will allow for the youth centre’s door to remain open.
She mentioned an important program that has been implemented is the partnership with Women’s Shelter Medicine Hat is to host mental health seminars for youth.
“It’s feeding their confidence and life skill,” said Ulrich.
“It’s teaching them to be responsible individual citizens in society that are self aware.”
Other programs that Redcliff’s youth can look forward to this year are workshops that are put on by volunteers for the high volume of males, who will work on various projects throughout the year.
Between November and December 2016, the Redcliff Youth Centre received donations from Casino by Vanshaw, United Way of South Eastern Alberta, Red Hat Co-operative Company, Red-Hat Co-perative staff, Servus Credit Union, Spectra Energy, RailPro, Redcliff Lionettes, Ladies Auxilary, Agrium Grant, Who’s on Third, Who’s on Third Patron and the Optimist Club and the Town of Redcliff for a total of $52,590. 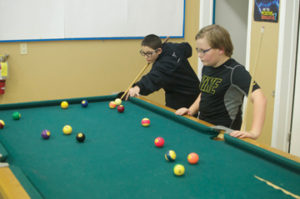