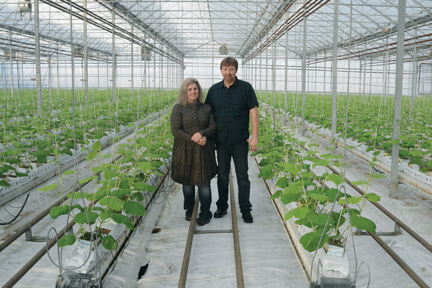 Cypress County discussed a  greenhouse proposal that came forth from  Kel-Lee Greenhouse owners Kelly and Shawndell Fischer in regards to artificial lighting in their greenhouse at last Tuesday’s council meeting.
The Fischer’s proposal to council was to reclassify the 3.87 hectares of land and change it from Agricultural District 3 (A3 Horticulture) to Agricultural District 4 (A4 Greenhouse). The change will allow for the installation of LED artificial lighting to stimulate crop growth and provide more efficient greenhouse production.
“This will allow them to produce their greenhouse crops 365 days of the year because they wouldn’t be solely relying on natural lighting from the sun,” said Jeffrey Dowling, Cypress County’s municipal planner.
Dowling added there are other greenhouses on the Range Road 63  that are also utilizing natural lighting. However, farther down the road there have been newer greenhouses developed in the last three to five years that are using a high pressure sodium lighting, which has the same production cycle as LED lighting.
The Fischer’s greenhouse has been in operation since 1999 and is located on a parcel that is near a potential growth area and the Medicine Hat Airport Overlaying Protection Area of the Tri-Area Inner Municipal Development Plan (IDP).
When Dowling met with the airport authority prior to Christmas, they brought up concerns of the uncontained lighting coming from greenhouses and becoming a serious hazard for landing flights. Additionally, they felt the greenhouse developments should go through a comprehensive light risk assessment.
“We did meet with the airport as well and they were unaware of it being an LED project,” said Shawndell.
“LED lights don’t have near the light pollution as the high pressured sodium.  When he talked to us, his concern was with the high pressure sodium and the fact those pilots are coming from darkness through the cloud cover to land, they’re finding that bright light a bit obstructive at times. It’s made out of blues, greens, reds and purples rather than being that bright intense yellow light they you see from the greenhouses south of us.”
Council’s decision was to postpone the matter until the Fischers get a light risk assessment done.
If the Fischers get approval, the plan is to purchase the black coat to put around the perimeter of their greenhouse to cover LED rays that may effect the pilots.