Safety the primary concern for county when it comes to trees 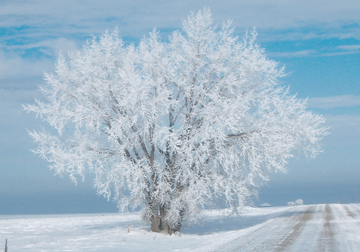 Photo submitted - One County of Forty Mile resident was not at all pleased when she found her favourite tree for taking photos of was recently chopped down. The County has strict regulations when it comes to trees in ditches.

By Jamie Rieger
There is no doubt that trees can beautify a property and even a single tree, standing alone along the side of a road can make for some pretty photos and make the landscape look a lot less barren.
On occasion however, even the most majestic, decade’s old cottonwood or poplar can create problems, particularly if they are along a roadside and can become a safety issue. For that reason, the County of Forty Mile has stipulations in place in its land use bylaw for setbacks in regards to trees and has protocols in place for when trees become problematic.
The issue has become a contentious one for some people in the county.
“We always try to be proactive and talk to the people upfront. When it becomes a hazard, like a wind or snow issue, and poplars will sometimes rot from the inside out,” said public works supervisor, Keith Bodin. “When the trees start to pose safety issues, we have to deal with it.  This is a mandate we have to follow and there are lots all over the county. I’ve always said that if that tree was out in the middle of the field and getting in the way of the pivot, what would they do? Well, it’s the same thing for us. Yes, the world needs trees, but when they are a safety issue, we have to deal with it. If we can just trim it, that’s what we do. But, sometimes we have to cut it down.”
Nathan Ogden, development officer said the Ogden said the issue first came to light in the County of Forty Mile in the mid-1970s when the County of Forty Mile was preparing its first land use bylaw.
“Then in the late 70s, there was a lot of snow and the county was spending a lot of money moving snow,” said Ogden.
What they learned at the time was that in areas where trees and buildings were set back from the roads, there was less road maintenance required. As a result, provisions were included in the land use bylaw to include setbacks and trees.
Ogden noted that the County has received complaints when they take down a tree.
“We do get complaints when we have to take trees out for whatever reason, whether it’s in the ditch or not. It may be it is causing drifting snow. People don’t always understand that we do it for safety reasons,” he said. “For trees on properties, we do understand that people have planted and taken care of those trees and we do sympathize, but we have to have safe roads in our county,”
In the current land use bylaw, setbacks and clear vision triangle requirements are included in Section 56 and shelterbelts in section 59. Included in the bylaw are regulations for clear vision for motorists at intersections.
Ogden said it was an unfortunate incident at an unmarked intersection where the line of sight was impeded for oncoming traffic that the County included Clear Vision Triangle stipulations in its land use bylaw.
Section 56 (4) reads, “Adjacent to an intersection of two rural roads, no approach shall be located within 100 metres of the centre of the intersection. Within the clear vision triangle, no building, haystack, solid fence, shelterbelt, or hedge of more than one metre high shall be constructed which could restrict the visibility of oncoming traffic.”
In addition, if the tree is growing in the ditch with branches hanging over the road where big trucks can be impacted or if the tree is inhibiting the view of an approaching intersection, the County will cut it down, or at least trim it, for safety reasons.
“It could be they are too close to an intersection and it hinders the vision or whatever, if it is a safety problem, we are going to clean it up,” said Bodin.
Ogden also said the many factors play into determining the metrics for any given clear vision triangle.
“There are so many factors that goes into determining clear vision triangle, such as how long it would take to slow down, whether the road is graveled, oiled, or paved; there are a lot of details factored into it,” said Ogden.
The County of Forty Mile is in the midst of updating its land use bylaw, and Ogden said they would like to hear from residents who have concerns.
“The County is in the middle of updating its land use bylaw and one of the items is trees. We would love to hear from people about this and they should contact the County and let us know,” said Ogden. We would really like to hear people’s comments. Everybody’s concerns are valid.”