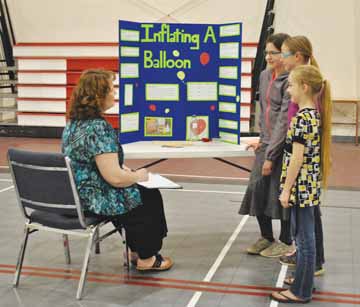 Photo by Jamie Rieger - Patty Rooks, senior scientific consultant for Praxis Society, asks questions of the students on one of the projects at the CCCA science fair.

By Jamie Rieger
From holograms and learning if music will affect your heartbeat to operating a graphite paper circuit and finding out which fast food hamburger will survive the longest in a sealed canning jar, the Grade 4-9 students at Cherry Coulee Christian Academy showed off their scientific finesse when the school held its first ever science fair last Thursday.
Patty Rooks, senior scientific consultant for Praxis Society, visited the students several times throughout the course of their projects to offer guidance and direction. Praxis is a Medicine Hat-based scientific outreach network that encourages positive scientific learning experiences for southeast Alberta students.
“Patty came out three or four times to help with different stages of the science fair projects, including with topics” said CCCA science teacher, Sylvia Strom.
The students started working on their projects approximately six weeks ago, and because most had never had experience with doing a science fair project in the past, were permitted some class time to work on it.
“Science fair projects are usually done on their own time, but because this was new here, we gave them class time and allowed them to work in groups,” said Strom.
Strom added that given it was the first science fair for the school, she was really impressed with the projects and with the work the students put into them.
“I was impressed with their endeavours. They had to put thought and work into their projects,” she said.
It is important for projects like the recent science fair to continue at rural schools, something Rooks works hard to ensure.
“These science fairs are a good opportunity for rural schools get their students involved with science. In rural areas, they don’t have things like interpretive centres or the Esplanade, so our students really need things like the science fairs,” said Rooks. “I came out working with them through the whole scientific process. For a first science fair, this is one of the best.” 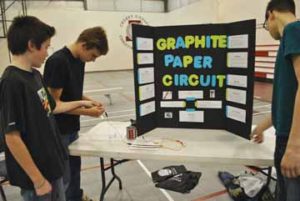 Photo by Jamie Rieger – These CCCA students demonstrate how a graphite paper circuit works…and how it doesn’t at last week’s science fair at the school.