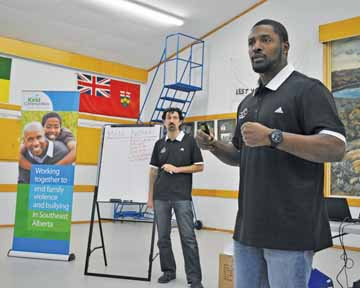 By Jamie Rieger
Domestic violence needs to become a community issue if changes are to be made and people in rural communities should know that resources are available should they need it.
“Often, people think that because we are rural, we don’t have these services,” said Corinna Roth-Beacome, director at Forty Mile Region Family and Community Support Services. “When we have issues in the community, we all work together.”
Some of these include, school liaison workers, Medicine Hat Women’s Shelter, Southeastern Alberta Sexual Assault Response Committee, and Victim Services.
Leading the Change, the Alberta CFL Project held presentations in Foremost and Bow Island on Apr. 5-6 to educate people on domestic violence and how they can make changes in their communities. FCSS partnered with the Kind Communities Alliance to bring the presentations to Foremost and Bow Island last week.
Leading Change, the Alberta CFL project was started in 2014 when the Calgary Stampeders and Edmonton Eskimos  partnered with the Alberta Council of Women’s Shelters to bring awareness and change to domestic violence issues in the province.
Tuval Dinner Nafshi, Leading Change Community developer for the Alberta Council of Women’s Shelters said when he was in high school, Dinner Nafshi said he did not drink or do drugs, and when the Grade 12 Safe grad party came around,  he felt pressure.
“I really did not want to go, but you only graduate once,” he said.
At the party, he felt nervous and just followed his girlfriend around until he went and hung out with friends who were sitting around a fire. Later, he found his girlfriend crying and began comforting her, learning that a classmate had sexually assaulted her. Because there was no way to leave the party, Dinner Nafshi said he felt stuck there.
“Back then, nobody talked about healthy relationships and every aspect of her life was being affected,” he said.
As the years went on and he went off to college, he learned that others had had similar experiences and he decided to get more actively involved with initiatives geared to protecting women and children and began working with the Alberta Council of Women’s Shelters.
“We represent over 50 shelters in the province and provide other services besides the shelter,” he said. “Last year alone, more than 5,000 women and children stayed in a shelter and another 8,000 were turned away because of lack of space. We need to change this reality.”
The ACWS partnered with the Calgary Stampeders and Edmonton Eskimos whose players and coaches took three days of training prior to going out into Alberta communities to talk about their experiences.
Two-time Grey Cup champion and Stampeder linebacker Keon Raymond is one of those players.
Raymond told of growing up with a father who physically, sexually, and verbally abused his mother on a regular basis.
“Eventually, we drove two days to Seattle to a shelter. When I heard about Leading Change, I saw it as an opportunity to tell my story,” said Raymond. “Everybody plays a vital role when it comes to leadership and teamwork, not just on the field. Domestic violence has always been seen as a women’s issue, but men it is our time to step up. Ladies, we have your backs. We all have a mother, daughter, wife.”
Raymond talked about how even the words one uses can be abusive and can be one of the most lasting forms of abuse there is.
Dinner Nafshi agreed, saying, “Verbal abuse is a huge component of domestic violence. It starts with the small things and slowly eats away. We often let those small things slide, but that is the foundation of where violence starts.”
The two men spoke about different forms of violence, including online abuse.
“Online verbal violence is becoming more common. It used to be that we went home from school and the bullying stopped. Now, it follows you home. It is there all the time,” said Dinner Nafshi.
Raymond recalled an incident in college where a buddy did not take ‘no’ for an answer when he made advances on a girl.
“The next day, he faced a rape charge and got expelled. I knew I didn’t want anything like that in my life, so I wrote up a contract that I would give to the girl ahead of time when I was dating,” said Raymond.
Dinner Nafshi said domestic violence needs to be a community issue if it is ever to be stopped.
“A lot of people think of domestic violence as a private issue; but we need to think of it as a community issue,” he said. “People need to know that help is available.”