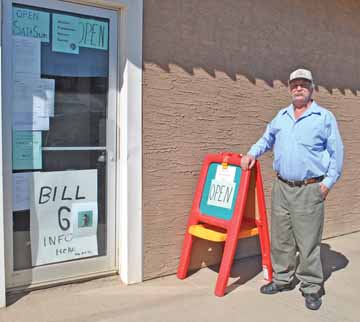 Photo by Jamie Rieger- Eric Musekamp says business has been slow so far since the opening of the Farm Workers Service Centre in Bow Island a few weeks ago. Currently, the office is only open part time hours, but is there for people who have questions or seek further information about the controversial Bill 6.

Early implementation of the NDP’s farm safety bill has been focused on education, says an investigator involved in the process.
Mike Rappel is an Occupational Health and Safety investigations manager who has been part of organizing the farm and ranch team team responsible for inspecting farm, ranch, and agricultural work sites in the province as related to expected changes to legislation stemming from Bill 6, the Enhanced Protection for Farm and Ranch Workers Act.
On Thursday, he walked through the main areas of focus regarding Bill 6 at a Southern Alberta Council for Public Affairs event.
“From our standpoint, we didn’t start investigating until given the authority on Jan. 1, 2016,” said Rappel.
“To date, unfortunately, we have been involved in a number of investgations.”
Bill 6 repeals the exemptions for farm and ranch workers that were found in a range of legislation. Generally speaking, Bill 6 affects four aspects of the employment relationship: general working conditions, the right to organize, worker safety, and WCB coverage for non-family workers by repealing earlier exemptions.
As a result of the controversy generated by Bill 6, the province amended it to allow owners, family members and neighbours to work on farms and ranches without being subject to all of the rules and restrictions as other workers.
Specifically, the parts of Bill 6 pertaining to OHS regulations and workers’ compensation were amended to exclude paid farm and ranch owners and their family members, as well as friends and neighbours who do not work for wages as defined by the Employment Standards Code.
Prior to the bill, OHS did not have jurisdiction on farming and ranching operations, meaning there would be no OHS investigation following a serious injury incide.
“Now, at least, we have the ability to go out and ask some questions and do the investigation to determine what happened, what was in place, what could be in place, and what are the preventative measures we can put in place to ensure that doesn’t happen again,” said Rappel.
“We’re looking at preventing something from happening again.” “We’re looking at the worker safety aspect to see what can be done to prevent this from happening again.”
Rappel said common incidents reported on include motor vehicle collisions, animal handling incidents, entanglements, slips, trips, and falls.
He noted in spite of the controversy surrounding the bill, there have been no reported incidents with access to sites for OHS investigators.
“So far, all the sites we have been to, and the farmers we have dealt with have all been positive,” Rappel said. “We have our approach. We selected people who have ag backgrounds, who know the business, the farm, crop, and animal cycles.
“Getting out to a site and being able to discuss the issues with the employer directly in their terms has been really good for the community that way.”