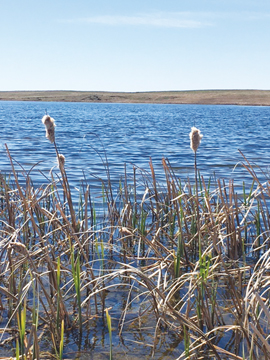 PHOTO SUBMITTED BY JONATHAN POOL - Ducks Unlimited is co-ordinating with landowners to preserve wetlands through its Wetland Restoration Lease program.

By Justin Seward
Ducks Unlimited Canada (DUC) is always trying to find new initiatives to preserve wetlands in Alberta because it is a vital place where millions of migratory birds and other wildlife gather annually.
Wetlands play a role in the defence against flooding, drought and soil erosion, while providing recreation and learning opportunities. Additionally, wetlands filter our water and help fight climate change by storing carbon. However,  64 per cent of Alberta’s Wetlands  have been lost or degraded in settled areas of the province.
One program that is being offered  is the Wetland Restoration Lease Program where DUC is compensating land owners based on the current fair market value for previously drained wetland areas that are restored under a 10-year lease. However, under DUC’s guidelines, the wetland areas stay under the management of the landowners and may be hayed or grazed but they cannot be grained or altered during the agreement.
“The wetland is back on the gown and re-established,” said Jonathan Pool, DUC’s wetland restoration specialist. “It’s good for not only a  water biodiversity, but hunting as well.”
Water is harder to come by in areas of Alberta such as Cypress County and can affect how wetland areas can be preserved and the development of the program.
“Being the hot spot in southeastern Alberta, any chance you have at  places that holds water rather than run right off the landscape, is of high value and you realize that and recognize it,” said Carson McCormick, DUC’s conservation specialist. “We’re trying to do everything we can in these areas in southeast Alberta with water on the landscape. Drought protection is a  big thing, especially if you’re a livestock owner, you need your cows to get water, so that’s what we’re pushing for.”
If DUC sees a vulnerable area that has an habitat abundance on it  and is for sale, then the company will purchase the land, fill the basins and re-sell the land with warning sign put up that the wetlands cannot be drained.
Meanwhile, in 2013, DUC purchased the Bullshead Ranch, which is 1,500 acres of native grass that has a number of wetlands that house ducks and is recognized as an important area because if DUC did not purchase the land it could have been turned into a crop field. According to McCormick, native grass is down to two per cent from what it used to be and is one of the most valuable landscapes in the world for wetland preservation.
DUC hopes moving forward to secure more acres on the ground so wildlife will continue to make the wetlands their home. More information on DUC programs can be found at http://www.ducks.ca.