Highway 61 project remains at a standstill

Photo by Jamie Rieger - A significant amount had already been completed on a major road construction project for Highway 61, west of Etzikom when Alberta Transportation was forced to put the brakes on it and re-apply for environmental approvals.

By Jamie Rieger
With road construction season in full swing, many in the County of Forty Mile have been left wondering why a major road construction west of Etzikom was abruptly brought to a stop and has not yet resumed.
“We have school buses with kids on that road. It’s not safe at all,” said county reeve, Bryne Lengyel. “I can understand environmental delays, but be responsible.”
The $10-million project that includes 15 kilometres of the highway being repaved, widened, and re-aligned was brought to a halt several months ago, even though significant work had already been completed.
According to Alberta Transportation public affairs officer, Nancy Beasley Hosker, Alberta Transportation had completed designs for the project in  2006 and the following year, Alberta Environment provided an environmental clearance letter for the project.
Last year, funding was allocated, the project was tendered, heavy equipment moved in, and work began.
During this time, but after Alberta Environment had provided the environmental clearance letter, the provincial government passed its Water Act, and more specifically, its Wetland Policy.
“After construction began, Transportation staff realized we needed a new permit so we suspended work,” said Beasley Hosker.
Cypress-Medicine Hat MLA Drew Barnes said the delay is typical of the NDP handle issues in rural parts of the province.
“The people in the county have been waiting for this road to be improved for years and it is a safety issue,” said Barnes. “Everything the NDP does slows down our rural economy. I have been told this project is being held up because of water pooling in the ditches. This is a huge issue and that road needs to be improved for safety reasons. Now, we’re going to be looking at huge cost increases.”
“Environmental assessments are absolutely crucial. We aren’t disputing that, but looking at all these layers and layers of beauracracy, how can our economy thrive?” he added.
Alberta Transportation has been working with Alberta Environment and Parks officials on the permit application and are now waiting for wetland approvals and a new permit to be issued.
“When you have water pool between the railway and highway, I don’t think that’s the same as a natural habitat. It’s time for us to move forward and be patient,” said Lengyel.
Beasley Hosker said that once they receive the necessary environmental approvals, they expect to resume construction this summer.
“We appreciate the patience of area residents while we complete this process. There are no impacts to traffic while work is stopped as traffic continues to use existing Highway 61 lanes, and again, we hope to get back underway this summer,” she said.
A new completion date will depend on when construction resumes. 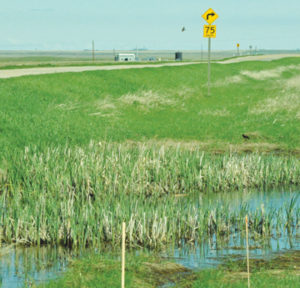