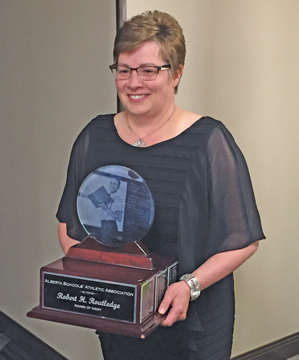 By Jamie Rieger
A former Foremost resident credits her high school phys ed teacher and coach for the mentorship and encouragement she received growing up.
Sheila Garber who teaches in Calgary, was recently awarded the 2017 Routledge award for her years of working and promoting sport.
“It was a very humbling experience and overwhelming to have colleagues, former students, and parents to recognize my work in promoting sports,” said Garber.
Garber credits her high school coach and phys ed teacher Glen Magneson for encouraging her along the way.
Garber began her teaching career in Ardmore and throughout her career, has been involved in athletics. Currently, she is the athletic director at Bishop Carroll High School in Calgary. At the school level, she has coached cross country, volleyball, basketball, badminton, and track and field and has held the position of Staff Liaison for the Bishop Carroll High School Athletic Society since 2013 and has assisted students make connections and participate as volunteers with the Wheelchair Rugby and Wheelchair Basketball Associations.
A segment in a written biography of Garber says, “She takes time to connect with her students, whether it be by visiting them regularly in the hospital, spreading inclusivity, or just by checking in with students. She genuinely cares about each and every student that crosses her path; she sets them all up for success.”
Magneson said he recalls Garber as being very focused and always happy.
“This was quite a few years ago, but I remember Sheila for being a very keen competitor and was always smiling,” said Magneson. “She is a great person who has done a lot for sport in Calgary.”
The Routledge award is handed out each year to people who have shown exceptional performance in the promotion and operation of athletic programs. The award is named for Robert Routledge, who was instrumental  at the inauguration of the Alberta Schools’ Athletic Association in 1956 and worked in developing policies and activities.