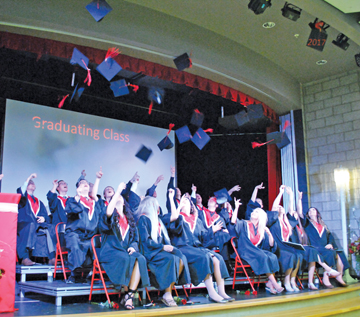 Photo by Jamie Rieger - Senator Gershaw grads toss their caps in a traditional finale to their graduation ceremony last Thursday.

By Jamie Rieger
The graduates from Senator Gershaw held their ceremony on Thursday evening, with well-wishes and light-hearted messages from dignitaries and school administration before finalizing the event with the traditional cap toss.
According to principal, Scott Angle, the students have achieved plenty in their high school years, accumulating a total of 2,970 credits over three years; 135 per student during their high school years. They also earned $28,000 in Rutherford Scholarships.
Cypress-Medicine Hat MLA Drew Barnes addressed the graduates with encouraging words as they move forward.
“Our lives are filled with big moments all the time. I am still growing and learning,” said Barnes. “You never know the value of a moment until it becomes a memory and the next big time of your life may be just around the corner.”
Bow Island mayor Gordon Reynolds told the graduates that their theme “Time of My Life” had him reflecting on his own life.
“Your theme has had me thinking and reflecting about what may have been the time of my life and I recall there have been many, including my own graduation,” said Reynolds. “My wish for you is that you will also have notable times in your lives and in the future when you look back, that growing up in Bow Island is one of them.”
Reynolds, much to the delight of the grads and those in the audience, went on to rap a few lyrics from the rapper Pitbull.
Prairie Rose School Division chair, Stuart Angle, kept up with tradition by providing humorous words of wisdom for the graduates.
Superintendent Brian Andjelic also gave encouraging words to the graduating class.
Valedictorian Justin Serfas, in his opening remarks, promised to deliver a brief, lighthearted address and reflected on his teammates for sports through his high school years.
“It takes teamwork to make the dream work,” he said.
It was Bill Ressler in his address to the graduates that had each of them in stitches as related special moments of their times in his Social Studies classes.
At the end he offered a special challenge to both students and parents.
“Before you move out…I challenge you to write a letter to your parents, a sincere and realistic letter about what they have meant to you and parents, I want you to do the same. Tell them how proud you are of them and your wishes for them.”