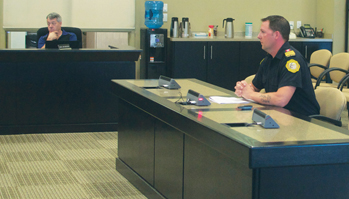 Photo by Justin Seward - Cypress County's emergency services supervisor and fire chief attended the June 6 council meeting and brought with him a detailed report on the advantages of a new fire station in Dunmore. Council, however, voted to go with submitting a bid for the Outlaw Collisions building.

By Justin Seward
Cypress County’s new emergency services supervisor and fire chief Kelly Meyer came before council to present the options for the new Dunmore Fire Station on June 6.
After an in-depth debate, Cypress County council  voted to put a bid in on purchasing the Outlaw Collision building in Dunmore for a new fire station.
The decision came after a recorded vote of 6-3 in favour of putting the new station in the vacant  building.
However, Meyer did make a case for his preference of the Dunmore Fire Station’s direction.
“My thoughts are we need to build a station,” said Meyer.
“I’ve seen it before where you try  shoving things into a building long term and all of sudden the county decides to extend their services (with Medicine Hat Fire Services) or maybe venture down a different avenue for emergency response. Do we have the space? I feel it doesn’t meet the future needs of the county.”
For the county to build a new fire station, it would be in their best interest to purchase the land at 902 2nd Ave.  in Dunmore  and use the space to build a new fire station along with a training facility. This would allow for firefighters to come in and meet certification needs and provide a higher service for the community.
Coun. Dustin Vossler, who sits as the chair on the county’s fire service board, said  he does not see why council is concerned about spending $1.2 million on a fire station and not getting the funds back and firmly believes the county will get it back.
Vossler was not hesitant to say that Cypress County is under scrutiny because they ended their fire services agreement with the City of Medicine Hat and needs to deliver a clear message of what the county’s intentions are.
“Cypress County Emergency Services is underneath the microscope right now with what’s been happening lately  and I think by taking our half-ass way of doing stuff is making us look bad,” said Vossler.
“If that’s the way you guys want to go, I’ll come along with you, but if your ships sinks, I don’t want to be on it.”
Meyer recognized that the Outlaw Collisions building is ideal because the building and will provide adequate floor space for the three engines, two squad trucks, one rescue truck and one tender, while having a training area that can be utilized as a training room and be a long term solution.
Reeve Darcy Geigle said council should stay with the Outlaw Collisions building because it is already half built the way the county wants and add-ons can be done as the facility moves along.
The recorded vote showed that Couns. Richard Oster, LeRay Pahl and Dan Hamilton were against the decision.
Cypress County will submit a bid application in for the Outlaw Collisions building.