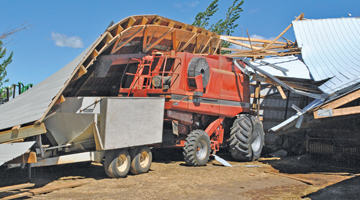 Photo by Jamie Rieger- A piece of farm equipment sits beneath a collapsed wall from their hay shed that came down from the wind in last Thursday's storm.

By Jamie Rieger
To say it was a little breezy on Thursday night would be an understatement, and with winds clocked at well over 100 km/hr (with some recording 117 km/hr for west of Bow Island), it’s surprising there was not more property damage.
The Dekker farm, south of Burdett, saw substantial damage from the winds, including the destruction of their hay stand, which was housing a combine and grain truck.
“It looks like the roof got lifted, then the walls collapsed,” said Fritz Dekker, adding that there was considerable damage to the combine and a two-by-four went through a window on the truck.
Large tree branches that came down around the farm also caused damage and knocked out the power, Repair crews from K Line in Lethbridge were on-site Friday morning to get the service back up for the Dekker family.
Dekker said they will rebuild the shed, but in a different place. In the meantime, they will be cutting hay in about three weeks.
“So, we need to get it rebuilt quickly,” he said.
Dekker, who was waiting to hear from his insurance company on Friday, said he estimated the cost of damage to his property to be between $75,000 and $100,000. 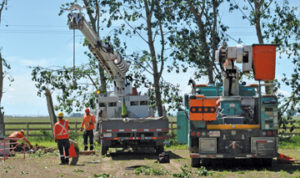