Trip to Vimy a life-changing experience for Bow Island girl 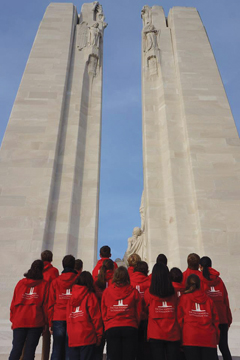 By Jamie Rieger
August was a whirlwind of a month for Bow Island’s Madelyn Burgess as she visited Europe as part of a group visiting World War I and II battle sites after winning the national Beaverbrook Vimy award, through the Vimy Foundation earlier this year.
Burgess returned home on Aug. 21 and already has six speaking engagements lined up to talk about her experience.
“It was incredible, life-changing. We started in London where we stayed in school dorms and toured memorials,” said Burgess, adding that they listened to lectures from Ph.D. students at the Imperial War Memorial and at Oxford University. “We learned about the effectiveness of these memorials and how people interact with them. It was very interesting. At Oxford, we learned about the fighting that did not take place on the Western front, like Egypt and Turkey; we learned who has been forgotten.”
She also learned about how memorials are treated over time.
“This led to some great discussions throughout the trip and some minds got changed by the end,” she said. “A lot of the focus was on groups like the Chinese and Colonial fighters, when the event happened and how all of it impacts us.”
The group also visited a German gravesite that holds 45,000 people, who had been moved from other gravesites into one mass cemetery.
“The question was, ‘Do we honour and respect these fighters, too?”
“It was such a great opportunity even with the people I met and the inter-relationships that were forged,”
In France, they visited a town at Juneau Beach where they met with veterans and family members of vets.
“It is so important. There is no one left who can tell us about World War 1 and the World War II resource is dwindling too,” said Burgess. “It is our duty to remember, to collect these accounts and share them with other people.”
So, Burgess wrote a few words to share here:
“This summer, I had the opportunity to meet my great great uncle Charles Franklin Broadbent. I took the long, uncertain journey to Europe by plane, feeling security that he likely did not. At least in my heart, I knew that I was not under threat of bodily harm or loss of life. From airport to airport, I found myself wondering how Charlie felt, whether he was afraid. I knew that many soldiers of the first world war were ignorant to the horror and pain that awaited them, but they certainly must’ve been scared, wouldn’t they have been? I wanted desperately to feel what Charlie had, to live his experiences, though that desire ended once I contemplated the horrific sights he must’ve seen and moments he lived through. I cannot imagine wishing that upon anyone.
Me and each of the other fifteen recipients of the Beaverbrook Vimy Prize had the opportunity to honour a soldier of the first world war though the Bringing the Boys Home project. We spent hours upon hours each day walking through cemeteries, stopping at a few choice graves to tell a story that didn’t explicitly belong to us, but one we had taken upon ourselves. The story of our soldier. Some of us, however, didn’t have a grave to visit. No one knows where Corporal Broadbent was buried. For these men, we found their name on memorials. These ranged from Menin Gate to the RAF Bomber Command Memorial. Charles’ name has been honoured only once, on the Canadian National Vimy Memorial. I had the opportunity to give a bibliography of my uncle to the other students, to read a passage of scripture, and pray in Charlie’s behalf.
Through our effort to visit and remember these individuals, we have brought them home. Their sacrifice is honoured, and they are not forgotten.”