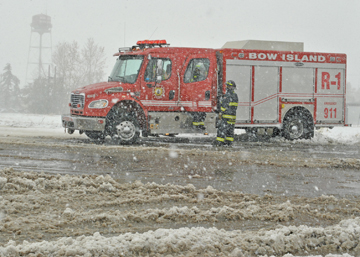 By Jamie Rieger
Some electrical customers were still without power in Bow Island on Tuesday morning and digging themselves out after an early winter storm ripped through southeast Alberta on Monday.
According to Alberta Agriculture’s Climate Information Service, 33.9 mm of accumulated precipitation was recorded at the Bow Island North weather station for Oct. 2.
The snow/rain coupled with strong winds shut down Highway Three from Taber to Medicine Hat, leaving many travelers stranded in Bow Island.
Mayor Gordon Reynolds said a tour bus with approximately 30 passengers was among those who sought refuge at Senator Gershaw School for the night.
“The school staff looked after the people. They fed them, had blankets, had cots and gym mats. People were relatively comfortable,” said Reynolds.
Alan Beck, from Lewiston, Montana was on his way to Seven Persons when the highway closed and he was forced to pull into Bow Island to wait out the storm.
“From Warner to here, the roads just kept getting worse. It was when I passed through Grassy Lake, they said on the radio that the road was closing,” said Beck. “I was raised on this kind of stuff, but I am glad to be safe in Bow Island.”
Bow Island public works crews have also been working tirelessly.
“Yesterday, public works worked just to keep our critical infrastructure going,” said Reynolds. “Now (the day after the storm), they are trying to open up some of the roads. Then, they will also have to deal with the downed trees.”
Marilyn Hirsche at the Village of Foremost office said they had some damage in town and power was restored last night.
“The storm did cause a disruption. Our power came back on last night and there are some broken trees,” said Hirsche. “The staff has been out clearing roads this morning so people can get to work.”
Fortis Alberta expects all power to be restored in Bow Island by 4 p.m. on Tuesday afternoon.

By Justin Seward
Around 16,000 southeastern Alberta electricity customers were without power after a snow storm swept through the area on Oct. 2.
Alberta Transportation issued a road closure noticesfor Highway 1 from Calgary to Bassano, as well as for Highway 3 from Taber east to Medicine Hat following multiple weather-related collisions today.
Non-essential travel is not advised along Hwy 3 west of Taber to Fort Macleod.
RCMP officers and maintenance crews will be maintaining road blocks along Highway 1 in the closure area to allow maintenance crews to clear the road.
Multiple schools across the rural Prairie Rose School Division shut down Monday due to weather conditions. Jenner and Schuler were closed right from the start due to poor conditions, while Schools in Burdett, Bow Island, Eagle Butte High School, Redcliff, Foremost, Ralston and Seven Persons closed early, with buses and parents coming early to bring students home.
New Brigden, Warren Peers, South Central High School,  and Oyen Public remained open.
Crews from the around the province came into help in restoring power.
It was expected power would be restored in some areas, while others would have to wait over night before power would be back up and running.