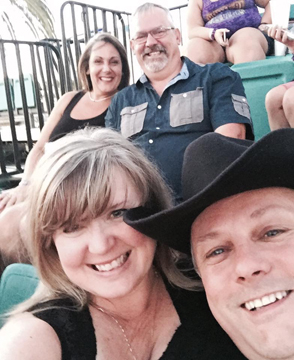 Photo submitted - Gord Davis, Christine Desautels, and Dwayne and Michelle McNeill are pictured at the Route 91 Harvest Festival in Las Vegas on Oct. 1 about two hours before the shooting began with the group quick to help get people to safety.

By Jamie Rieger
Former Bow Island resident, Gord Davis is very grateful for the training he received as a volunteer firefighter in his hometown when he had to put that training to use during the Route 91 Harvest Festival shooting in Las Vegas on Oct. 1.
Davis, who now resides in Prince Rupert, was attending the concert with Christine Desautels, Dwayne McNeill, and Michelle McNeill and sitting in the bleachers when the shooting started. He and Dwayne were quick to action getting people to safety when the gunfire started.
“When we heard the first few pops, we thought it was fireworks and kept looking up, but couldn’t see any. Then, there was a burst of rapid gunfire, but I didn’t know where it was coming from,” said Davis. “I started to see people scatter and panic, but still wasn’t sure where the gunfire was coming from.”
“We were sitting in the bleachers and I knew we had to get down and we ran for the bottom of the bleachers and started looking for something safe to get behind. There was a spot behind a concession truck and got the people I was with there. Then, the shots started again, so we took shelter again and told people to get in where we were,” he said.
Once they knew they were in a safe place, Gord and Dwayne, a trained RCMP auxiliary officer, began helping the panicked and wounded concert-goers.
“When we knew Christine and Michelle were safe, Dwayne and I tried to keep people calm. The area we were in was only about two feet across, so people had to move single-file,” said Davis, adding that he recalled words he learned while taking his training in Bow Island.
“One of the first things I was taught when I took my training in Bow Island and I can’t remember if it was Warren Bridge or Kelly Byam who said it, was to remember that ‘this isn’t your emergency, it is your job at the emergency and if it becomes your emergency, then you can’t do your job’. I am very grateful for that training,” he said.
They then sought out law enforcement officers and offered their assistance.
“When we left and got onto the street between the venue and the Tropicana, we went to talk to some police officers and asked how we could help. They put everybody very close to the Tropicana. On the way, we observed a man standing against a wall, holding his neck,” said Davis. “We tried to give him medical attention, but he didn’t want it. We kept trying and got him into the Tropicana and handed him over to security. Dwayne later found him lying on the floor of a washroom. We got the EMS and he got transferred to the hospital.”
“Not long after that, a young lady covered in blood, asked us for a cigarette, but we said we didn’t have any. She was going into shock, but told us the blood wasn’t hers, that she got bloody helping somebody,” he said. “The ironic part is that the gentleman she was looking for was the same guy we had just helped. They had gotten separated. We kept her with us for the remainder because she was distraught.”
Davis is back home in Prince Rupert and still struggling with it all.
“Today, I had a hard time concentrating. It will take a long time to heal from this. It was like a combat zone and I don’t wish for anybody to go through it,” said Davis. “So, I debrief and I talk to people. It helps. I am very grateful to all my friends and was very lucky to have Dwayne there with me, somebody else who has had the training. We were very fortunate that there were off-duty police officers, firefighters, veterans, Marines; so many people there who stepped up and helped.”