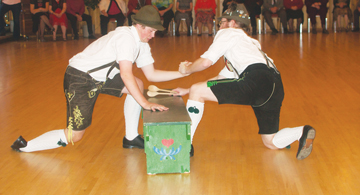 Drinks, music and a performance by the Calgary-based Schuhplattler made for a great evening of socialization for 175 guests at German Canadian Harmony Hall in Redcliff as a part of the 50th anniversary of the German Canadian Association of Alberta on Oct. 28.
Linda Cleveland, who is a board member of the German Canadian Harmony Club of Medicine Hat, said this a milestone for the association because they promote German culture to ensure their language continues, while handing out a scholarship to those students who study German and for others who are pursuing an education.
“It’s all to keep that German culture alive and going,” said Cleveland.
It was in 1960 that a group of Germans started the club and carried it right through until they became older and to a time where someone else could take it on.
“It’s our goal to offer activities, to offer dinners like we have been tonight to promote that German culture that dates back to the 1920s,” said Cleveland.
However, the number of attendees with a German background has been low because of people becoming seniors and not coming to the social functions that are put on through the hall.
“It would be nice have younger people who don’t even have to be German,” she said.
“They could be any culture come out to our functions, learn a bit about who we are, what we are and why we want to keep our club going.”
President of the German Canadian Association of Alberta , Anne Marie Juravel, said it was wonderful to celebrate 50 years in different parts of the province.
She said it is of advantage to have a German Canadian Harmony Hall in a small town.
“I think the small town feel is a really wonderful gemutlichkeit (German translation for the feeling of warmth and friendliness),” said Juravel.
“It’s certainly is a big advantage for the different generations of German heritage because the hall itself has been in existence since 1960 and this particular club has been the member of our club since 1972.”