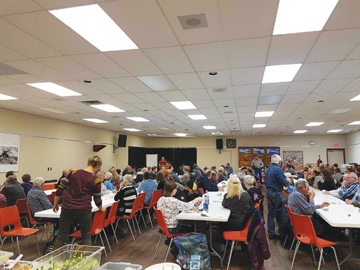 The Hilda Community Association hosted the Hilda Community Fire Recovery Supper at the hamlet’s hall on Thursday evening. The event allowed local residents affected by the Oct. 17 wildfire to speak directly and candidly with government officials and counseling services about the road going forward.
“We have a long road ahead of us but coming into this situation we were already a very tight-knit and close community,” says local farmer Jennifer Beck, who helped to organize the supper. “I think coming out of this the community is even stronger and even closer.”
Beck felt the meeting came at the right time for everyone involved.
“We are three weeks past the fire,” she says. “We are done all of the emergency crisis work as far as our animals and our land, and we have now had a chance to take a breath. We are no longer in survival mode. We are starting to think what’s going to happen when we go to put seed in the ground in the spring, or how we are going to get through the winter with the loss of feed or loss of pasture. There are community members who lost their homes. How do we support them? How do we try and lift them up now?
“We are just trying to figure out where the immediate needs are right now,” she adds. “And who can get by for another month until we can secure some more feed. I guess you can say we are kind of triaging the situation.”
Beck and her husband Josh had a large area of their pasture and croplands burned up in the fire, and now face a cattle feed shortage this winter. Neighbouring communities have been sending in emergency supplies of feed to keep everyone affected going.
“We have a few loads coming in from the Maple Creek area,” she states. “There have been a few load coming from the Dunmore area. We had a few come from the Wisdom area, and they are coming from other areas as well. We are very appreciative of the support we are getting from other communities, and the help. One guy said to my husband, ‘I would hope if I was in that situation would help me. I have the means to help; so that’s what I am doing.’”
Beck says Thursday’s recovery supper allowed local residents to have a forum to voice these kinds of concerns to MLA Drew Barnes and county officials, who will be meeting with the provincial agriculture minister next Wednesday. Beck hopes the provincial government will step in to help with funding and support for the longer term recovery effort.
“We are addressing the immediate needs. But we don’t even know what the impact is going to be on our future crop growing, or what we need to do to try to increase the help of the soil now that we have lost. There is going to have to be a sustained effort.”