Hilda residents looking for answers and county assistance after fire 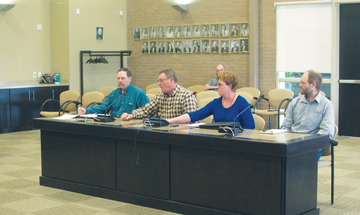 Members of the Hilda Community Association were on hand to talk to Cypress County council about how there could be less damage done for future fires and suggestions for communication improvements at the Nov. 21 meeting.
The association’s president Andy Kirschenman said the fire seemed to have flown under the radar and with the Saskatchewan government announcing they would match up $100,000 in fire relief and now the question becomes where is Alberta?
His hope is that question could be asked but realizes that the Saskatchewan Party and Alberta’s NDP are not on the same page with issues and maybe the provincial government can step in and do the same matching donation.
He said the fire permit policy needs to be changed because Cypress County being a large area has some diverse lancapes with the elevation changes that in his view “that’s a vastly different climate to make blanket decisions on fire permits and fire bans on,” said Kirschenman.
“You see often snow coming in September and leave in May in the Cypress Hills. In some years, we have no snow all winter long in Hilda. From a fire permit and a fire ban perspective , that’s something that should be looked at and we have heard coming from the county fire chief that that is being looked at and we’d like to just to encourage that.”
Additionally, he added that he’s like to know some of the criteria for obtaining fire permits because currently the permit is same the same for a one or two multi-family dwellings as it is for 15 pallets and a half a bundle of fence posts.
“There’s no place to put in the volume of wood to be burned there,” he said.
The association also determined they would like to see a municipal tax deferral and loans for producers to help with fencing costs and a cost that would be paid back gradually.
“If there’s anything the county can do to help the producers, we can supply you with a list of the producers that were affected we can supply that and at least give these people an opportunity to get back to what their livelihood was,” said local area rancher Brent Beck.
There is massive amounts of soil in ditches by the burn areas and will collect culverts and is will take a few years to work through the system, according to Kirschenman, and as a result a culvert could lead to a cut road.
Other suggestions included blading of the road for better access and looking into county policies for employees who are driving fire fighting equipment and cell service as it has worsen since the fire along the Burstall Highway despite Telus telling them their service is adequate.
Cypress-Medicine Hat MLA Drew Barnes was at the meeting and noted that he well bring up the aforementioned issues that were brought forth by the association at Monday’s meeting in Edmonton.