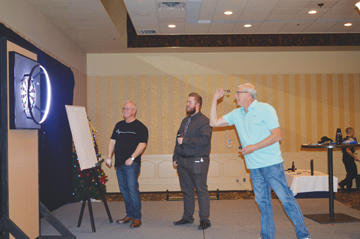 Cypress County Coun. Alf Belyea showed his more leisurely side at a Dec. 4 dart tournament in Medicine Hat, which included 11 other players.
Belyea has been playing darts competitively for the past decade, but said he got involved mainly for the social aspect.
He plays regularly back home in Suffield.
“We’ve got different venues we play out of during the week on Tuesday night,” he said. “We’ve got a good, strong dart league.”
Belyea was eliminated from the tournament, part of a western Canada tour of the World Darts Federation, in the first round.
“I did not throw very (well), but you play against these guys, and this is the first time I’ve ever played on a stage like that, it’s different, especially when you’ve got a crowd behind you,” said Belyea.
David Dennis also came to the tournament, held at the Medicine Hat Lodge, from Suffield, but he was just there to observe.
“I’ve come to watch some of the best players in the world play our local people,” he said, adding that it’s especially interesting to see some of the younger players compete, including 11-year-old Easton Huber from the Medicine Hat Youth Dart League.
“She comes from a dart family. Her mother played really played good darts and her grandfather played very, very good darts in the day,” he said.
Dennis used to be a dart player, but hip and shoulder issues forced him to become mostly a spectator.
“I was competitive for many years,” he said. “I watch and I play the odd time, not competitively anymore.”