Advertising billboard could come to Redcliff 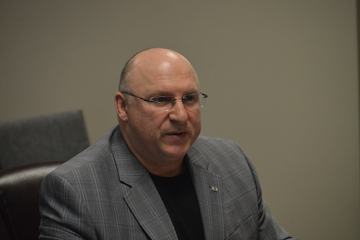 NEWS PHOTO JEREMY APPEL Kevin Panko of The Experts LED pitched his proposal to bring a two-sided billbaord to Redcliff at the Dec. 11 town council meeting.

A Medicine Hat-based company brought its proposition to build a two-sided LED billboard in Redcliff to the Dec. 11 town council meeting.

Kevin Panko of The Experts LED pitched the proposal to council, whose members were broadly receptive to the idea, but certain amendments to the Land-use Bylaw must occur before the project is officially approved.

“I’ve had a look around and I understand that this community growing and there’s another side — the Medicine Hat side — which has a lot of franchises in it.

“I’ve decided to pursue the opportunity to put up a billbaord and have local businesses be able to have an opportunity to increase their business, their revenue, and of course bring it in to the small community as well,” said Panko.

In response to a question from Coun. Chris Czember, Panko said he’s yet to solicit feedback from neighbours, but the response from the small business owners he spoke with has been positive.

“There’s nothing around here that allows for a small business to really compete with the big guys,” Panko said.

The billboard would be beneficial not only to local businesses, but the public at large, he added.

Mayor Dwight Kilpatrick said the major impediment to its construction is that the development currently contradicts the town’s Land-use Bylaw.

“The size, the location, the ownership, nothing conforms with the Land-Use Bylaw,” he said. “In fact, our Land-use Bylaw actually states ‘no billboards.’”

Municipal manager Arlos Crofts confirmed that this is the case.

If council moves to amend the Land-use Bylaw to allow the billboard, there will be broader public consultations on the project, Kilpatrick added.

Coun. Larry Leipert’s motion to accept Panko’s presentation as information and have administration look into the steps required to bring the billboard to fruition was passed unanimously.

Council also discussed the terms of its special transit agreement with the City of Medicine Hat, which provides transportation for people with disabilities in Redcliff.

Users who qualify for the service must register with the city up to two weeks in advance of the intended date of use.

The single-year contract council discussed includes a three per cent rate increase, which was included to in the 2018 operating budget.

Also on the table was the possibility of entering a three-year agreement, but Kilpatrick said there’s no guarantee against the rate increasing in the next two years.

A motion to adopt the one-year agreement put forward by Czember was passed unanimously.