Tigers sitting comfortably for second half of season: MacPherson 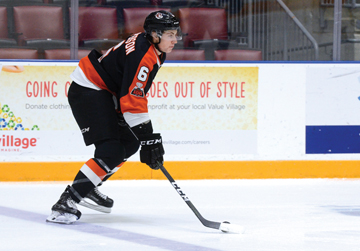 The Medicine Hat Tigers entered the Christmas break on top of the Central Division but after losing two of the three going into the halfway point of the campaign, there is still work to be done
“It gives us some confidence and helps us going in to the break with the mentality that we can play and win games in this division,” said Tigers defenseman and Redcliff native Dylan MacPherson, on being a top the division.
“I’d just like us to shoot the puck a little more. We hold on to it going into the ‘O’ zone a little bit too long and just funnel pucks to the net and crash the net a little bit more.”
He said he is confident in his own play with shutting top lines down and getting the puck on the offensive side of the ice.
“You move your feet and everything else will fall into place,” he said.
“You move your feet, wheel around the net, you hit a centreman or a winger, it just helps to break out a lot better instead of gliding around.”
More output in the offensive end is what he wants to see from himself going into the second half.
In his view, the games were closer than the scoreboard indicated against Red Deer and Tri-City.
“We battled hard the last couple games,” he said.
“It just came down to the final two minutes in a couple games where we just had to bear down and keep the puck out of our net and maybe getting a point or two going into overtime then have a better outcome.”