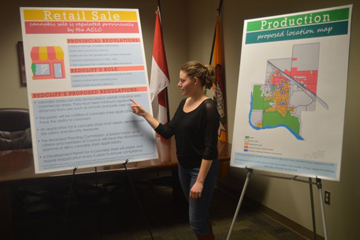 Commentator/Courier photo by Jeremy Appel Redcliff's planning specialist Jordan Zukowski was at the town's marijuana legalization open house on March 15 to answer anyone's questions and solicit input on its approach to cannabis sales.

By Jeremy Appel
Commentator/Courier
The Town of Redcliff held the first of two scheduled public consultations about marijuana legalization on March 15.
Jordan Zukowski, the town’s planning specialist, says the goal of the open house if to inform the public of municipalities’ role in establishing bylaws for legalized cannabis and solicit community input.
“There are only certain things the town has control over regulating,” she said.
“For example, the federal government is in charge of all things regarding production of cannabis, so how it’s grown, and the provincial government is in charge of all things regarding sale of cannabis.”
The town has the ability to further regulate the production and sale of marijuana within the confines established by the federal and provincial governments.
“The Town of Redcliff’s role is to determine the location of cannabis production facilities within the town, the location of cannabis retail stores within the town, and that includes how far we want those facilities to be from schools and parks, and other sensitive uses,” said Zukowski.
The province is permitting the same hours for marijuana sales as it does for alcohol, which is 10 a.m. to 2 a.m., but municipalities can restrict that further if they wish.
The town can also determine where consumption is permitted, which it will have to revive its Smoking Bylaw to enforce.
Currently, Redcliff operates under provincial smoking regulations.
“It’s quite likely that we will be re-writing and re-instating a Smoking to Bylaw to cover cannabis,” Zukowski said.
Although Redcliff bills itself as the “greenhouse capital of the Prairies,” the federal regulations regarding marijuana production require cannabis-purposed greenhouses to be fully walled off.
“The type of facility of greenhouse that we have in Redcliff are either plastic or glass and that is not a proper facility for growing cannabis under the federal regulations,” said Zukowski.
“It wouldn’t be as simple as just converting a greenhouse that currently grows vegetables to simply changing out the plants to grow cannabis.
“The facility itself has to be a lot more secure.”
It’s still a distinct possibility in Redcliff’s future, given its abundance of greenhouses.
“I’m not aware of any inquiries that the town has had for production facilities, but it could very well be something that we get inquiries about just as this comes further down the pipe,” she said. “No pun intended.”
Coun. Shawna Cockle, who attended the open house as a member of the public and property owner, said establishing municipal regulations for cannabis consumption is a difficult balance.
“A hundred metres from a school is not a huge distance … but then (if we reduce the limit) we’ll be restricting ourselves to nowhere and limiting access,” Cockle said.
“People want access, whether I like it or not.”
The second public consultation is scheduled today from 3 p.m. to 7 p.m.
For those who can’t make it to either open house, Redcliff’s cannabis legalization survey can be completed at https://www.surveymonkey.com/r/M8ZFG8L.
It’s open until March 31.