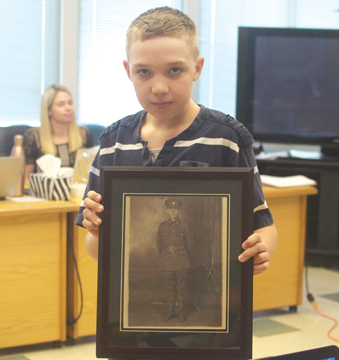 In the fall of 2016, Jenner School principal Murray Brown had drove by the community cemetery’s distinguished military graves and realized the area needed clean-up.
Brown and new junior high student Wyatt McLean presented the school’s initiative to Prairie Rose School Division at their April 10 school board meeting.
He said he walked to the military grave, which was in bad shape and while walking around the cemetery, he discovered the tombstone of Private James Tribe and on the back of the inscription that said, “gone but not forgotten.” Jenner had their Remembrance Day 2016 at the cemetery and adults were there who knew nothing of Tribe.
“I thought this is terrible,” said Brown.
“We can’t have this. After Remembrance Day, we went on a little field trip and the kids were quite appalled at the condition of the cemetery and James Tribe’s grave. We thought ‘oh gosh we didn’t even know half the stuff was here.’”
The class contacted the federal government and they sent back the documentation on Tribe and discovered he was 5’6” soldier who died in November 1918, the last year of the war, after enlisting in the military that July.
James died of influenza, while is wife died at child birth but the baby survived, who was named Thomas William Tribe.
After hitting a wall with the minimal information that was on Tribe, current students were asked to look at Canada 411 for all the Tribes they could find and phone them. They eventually reached great-nephew Lyle Tribe from Quesnel, B.C., a drummer Brown met in Tilley during a teaching stint.
Lyle was able to provide them with medical history, his will, while Brown was able to find a picture of his regiment
“We decided to want to clean up that cemetery and started with his grave,” said Brown.
“We’ve been chased away by the snow on numerous occasions including now. We showed up with our rakes .”
The school had been in contact with Commonwealth War Graves Commission’s Secretary General David Kettle and his reply was that the grave site was in bad shape after pictures of it was sent in.
“He said if we gave you $100 ever year, would your students take that to maintain the grave?” said Brown.
“We had a classroom discussion about that and our students said ‘we don’t need that money.’”
McLean described its condition as “nasty.”
“As people are driving by, they’re either going through it or going to Buffalo or Oyen through Jenner. They tend to throw out cups or cans and the wind picks it up and blows it into the cemetery.”
The project will be continous for the junior high school students.