Blues at the Bow celebrates 25 years 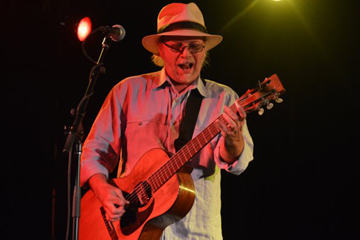 Commentator/Courier photo by Jeremy Appel Roy Rogers plays to a packed Bow Theatre for Blues at the Bow's 25th anniversary concert on May 12.

San Francisco-Bay area bluesman Roy Rogers made the trek up to Blues at the Bow to celebrate its 25th anniversary on May 12 in front of a sold out audience.
“It’s great to be back here. It’s one of my favourite places to play,” said Rogers. “I’m honoured … An anniversary gig like this, it’s an accomplishment to be recognized.”
This was his fourth time playing the Bow, which he said he loves playing due to its intimacy compared with clubs in bigger cities, like Calgary or Los Angeles.
“These are the kind of gigs where everybody’s just up close and personal, and as much as I play big cities, it’s fun to play for people who have their own community and there’s a different vibe about it,” he said.
“That vibe translates to the musicians on stage and you feel like you’re all part of it. Sometimes if you’re playing larger venues elsewhere, you can be kind of removed from the audience and you have to work a little harder to make it happen.”
Rogers says he got into the blues as a teenager, listening to B.B. King, and then he heard Robert Johnson’s slide guitar, which sealed the deal for him.
“That was it. When I heard slide guitar, that said it all for me,” he said.
“It’s a very expressive way to play and it’s become my signature way of playing.”
Rogers was attracted to the blues for its emotive potential.
“I want music to move me,” he said. “It’s not about how complex it is, necessarily, it’s if it moves you or it doesn’t.
“The blues moves me most of all, because you’re hearing the passion of someone … When you’re listening to a John Lee Hooker or a Howlin’ Wolf or somebody like that, if you’re not moved, there’s something wrong with you.”
Rogers has himself collaborated with John Lee Hooker and Sammy Hagar from Van Halen, as well as recording three albums with Ray Manzarek from The Doors.
He also worked on the soundtrack for One Flew Over the Cuckoo’s Nest, which won the Academy Award for Best Picture in 1976.
Steve Ell, Blues at the Bow’s business manager, has been involved with the venue since the beginning, first as a regular attendee and then as a board member since 2008.
“Who would have thought, right here in Bow Island, an old shut-down theatre? It was a whim of a couple guys who had a dream and believed in it.
“They went through and tried it, and they said, ‘Yeah, okay. This is cool, but it’s probably not going to last forever.’ But it just keeps going.”
Ell attributes this continuing success to Blues at the Bow having found a niche market in southern Alberta, attracting not just locals, but attendees from Medicine Hat, Lethbridge and Taber.
“We’re out here in the middle of nowhere with a dedication to the blues and it attracts people,” he said.
“The atmosphere is really good when this place fills up with people, it’s unique. I’m in this area and I come in here and it’s a little bit of escapism.
“I walk in and it’s like being in a downtown Vancouver nightclub, not little old Bow Island.”