History club up and running at Margaret Wooding School 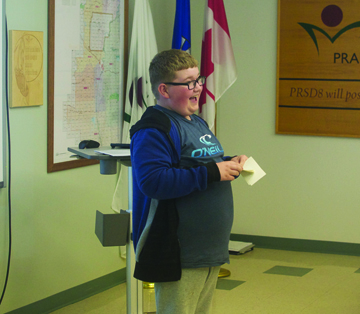 There is a historian in the making at Margaret Wooding School.
School principal Craig Corsie described the history club’s founder and president and CEO, Kaiden Nott, as the student who “came up with the idea, built the idea and runs the idea,” at the Prairie Rose School Division meeting on May 10.
Nott said the club has been “quite successful at Margaret Wooding School,” at the begin his presentation to the school board trustees.
It all began for Nott at the age of seven when he watched a cartoon on TV about an Egyptian museum, which he found interesting and did more research on ancient Egypt.
He then brought out a humourous remark to the crowd about what he said to his mother.
“I asked my mom what she could tell me about Cleopatra,” said Nott.
“But what I said was ‘mom since you were born in the 18th century, what can you tell me about Cleopatra?’ She didn’t find that funny and said to me ‘how old do you think I am?’”
He continued his research on the pyramids, tombs, pharaohs, gods and King Tut.
“Did you know King Tut was born with a clubbed foot?” he said. “He cracked it and so we was crippled and had to walk with a cane. That might have been the cause of his death because he might have tripped.”
He had passed his Egyptian knowledge onto his Grade 2 classmates.
“None of them liked it, not one,” he said.
Nott brought the idea forward to form an Egypt Club, but not a lot of his peers were a fan of the idea, since it focused on one country.
He went back to the drawing board by talking to his mom about how he could make the club more interesting and she recommended opening the idea up to more types of history.
The next year that he watched many Horrible History episodes, YouTube videos and went through every history book he could get his hands on.
Once he was in Grade 5, Ms. Bongaards taught history club in her class and it started with 10 members but by the end of the year there was five members.
Now in Grade 6, Mr. Neigum has let Nott use just his classroom on Tuesdays at lunch hour.
“So much more successful,” Nott described the club this year.
“I have about 20 members, even some teachers. I share all kinds of knowledge.”
His hope is to continue the club at Parkside School next year.